As predicted a couple of weeks back, this was a busy week with a few deadlines rubbing up against each other.

The RFID readers for the second batch-of-100 Museums in Boxes arrived from China. These are off-the-shelf modules that need the connector to be soldered on, so although my design work last year for the custom PCB means that all the assembly for that is done by European Circuits up in Glasgow, there's still some soldering that we do for each batch.

As we've already sold a third of the batch, we want to get the boxes built and shipped out as soon as possible. The customers all know that things are still in production, but it's good to get them shipped as promptly as we can. So this week's big soldering task was a day of soldering up readers. 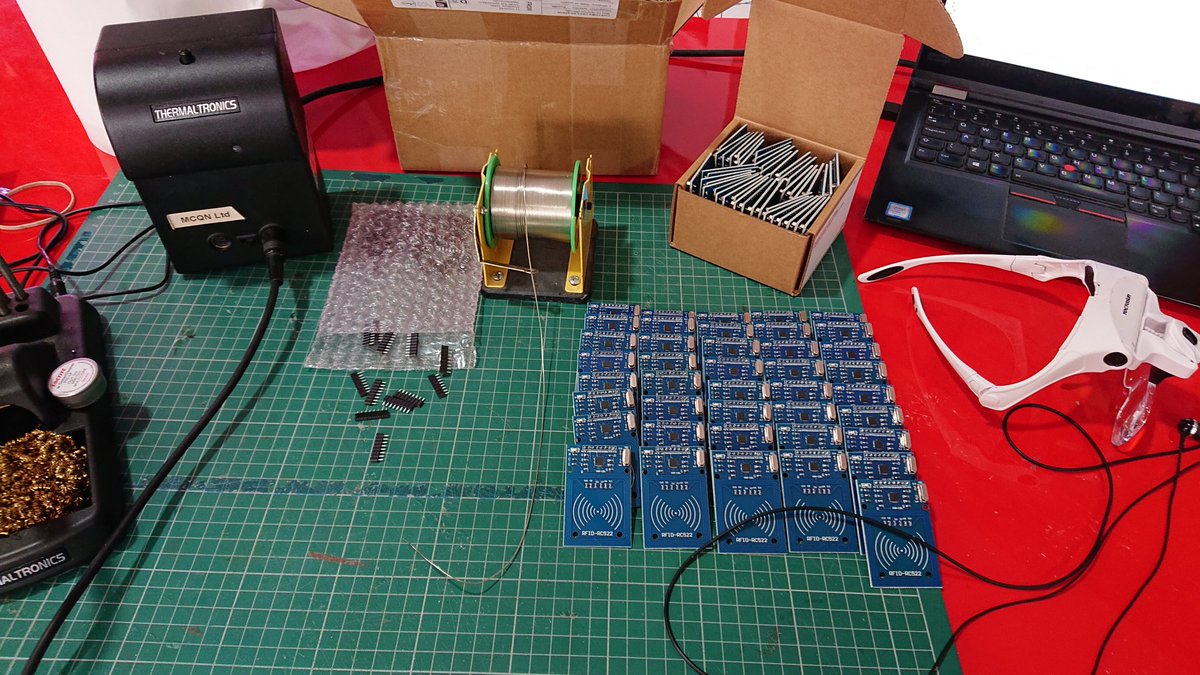 Given that meant a day in the office, I moved the soldering station through into the events room and st up there for the day. That's because I could then do some stress-testing of the My Baby's Got LED controller board using the Geometric Lights and keep an eye on it while I was soldering.

The board was designed to cope with the 30 amps that a 500W PC power supply can provide. It's only at 5 volts, so isn't as scary as it sounds, but it's the current that can overheat wiring and traces on PCBs so I wanted to confirm that the boards held up okay at the limits of use. 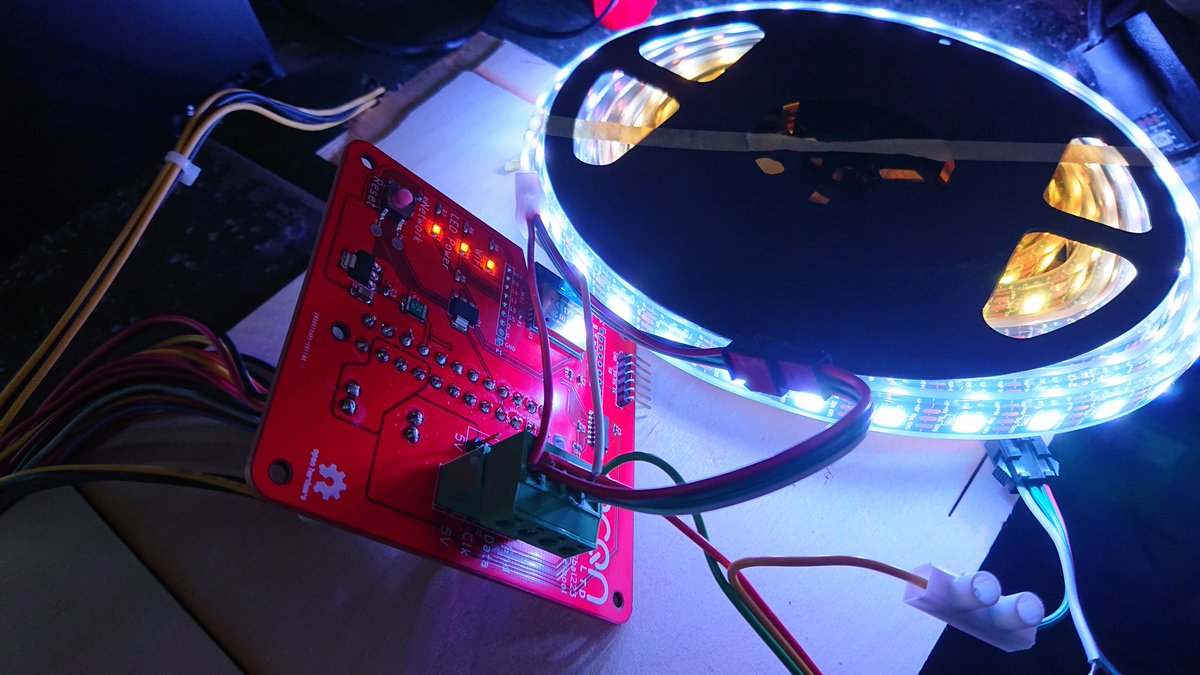 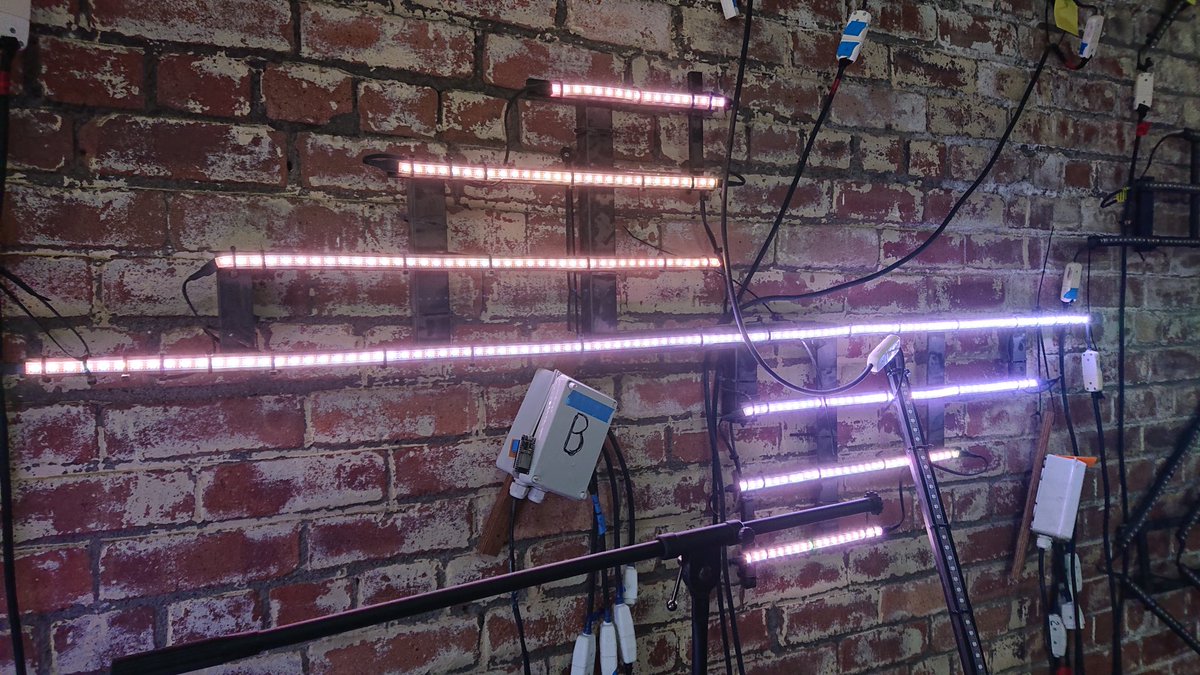 I set up a test run with 608 LEDs in it, running through a reel of 300 and then one of the largest baubles. Then in the WLED control software I set them all to white and full brightness so they'd be drawing as much current as possible. WLED has a handy "info" display option that lets you know how much current it should be drawing—it's calculated rather than measured, but will be close enough. 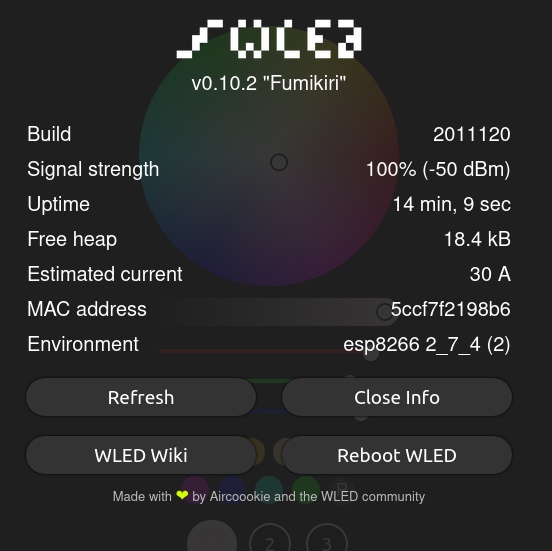 Then I took temperature readings for a few key points around the PCB and left it running all day while I got on with the soldering. At a number of points during the day I checked on the temperatures—more frequently at first, and then over longer periods as I was happy things were okay. Around the fuse and terminal block, where the current flow is most concentrated, the board got warm fairly quickly but then sat at around 40°C regardless of how many more hours it ran. All good.

It's also been lovely to see reports starting to come in as customers receive their boards and hook them up to lights:

LED control board from @amcewen, £10 LED string from AliExpress and a Freecycled PSU from around the corner and we're in business🎄🎅👍 pic.twitter.com/9xIlwi0DCP

Arrived at @theastralship with @goatchurch and he immediately decided to throw up a huge scrap LED strip using @MCQN_Ltd's new "My Baby's Got LED" board. An invention made @DoESLiverpool. All happened within 20 minutes. It's on the network too, via #wled running on the board. pic.twitter.com/kioitiiMKs

So we put @amcewen’s awesome LED controller into Williamson’s Butchers in Waterloo! Scarily easy to install. Next I need cool ideas on how to enable passers by to control this. Maybe cheer lights ? #weeknotes pic.twitter.com/2XXytFO47i

Have to say @amcewen has done a great job with his LED controller board. Super simple plug and play. Hooked it into MQTT easily and now I have some #cheerlights https://t.co/hmq4UjNS2Q #weeknotes #green pic.twitter.com/kvvkeBR3qS

The normal work week was rounded off with half-a-day of technical interviewing. One of the perks of everything being online now means that helping a client in another country to run some technical interviews was pretty easy to fold into the rest of a week of work here in Liverpool. I don't think the interviews were any harder (as an interviewer, at least) than in person, and in one case meant that the interviewee could more easily pull up a photo of one of their projects to show us when it came up in discussion.

The rest of my time this week was taken up with preparation for, and then running, the My First PCB Kicad course.

We split the course into four "lessons": an initial one that takes you through the basics of designing a PCB; then a pick-and-choose from designing symbols and footprints for components that aren't in the standard library; exploring the 3D visualisation and exporting options; and using the SVG2Shenzhen Inkscape extension to create more artistic PCBs.

My preferred way of running workshops is to do a short introductory preamble and then let people work through the exercises at their own pace. That seems much less stressful than trying to keep everyone in lock-step with me showing things at the front, although it does require quite a bit more course-note writing for me beforehand. During the workshop I can then roam around the room offering more targetted help to anyone who hits any problems.

I wasn't sure how well that would translate to an online session, as there wouldn't be the same cues available to let me spot anybody struggling, and I wasn't sure if we'd get the same camaraderie among participants as they make breakthroughs or share their work.

Thankfully my concerns turned out to be mostly unfounded. After the initial introduction, people mostly worked with their cameras off and microphones muted, except for when they wanted to ask or share something. I left my camera running the whole time and was always monitoring the audio, and we all dipped in and out of discussions when they arose. Sometimes I'd share my screen to walk through things, and others did the same when showing off their work. Ross (who did an excellent job of helping me prep and run the course) and I had set up another "quiet room" on the meet.coop conferencing set-up we used, in case people wanted somewhere to hang out without any distractions from others asking questions, etc. but in the end we didn't need it.

It was a really enjoyable workshop, with a great range of ideas being explored: from guitar effects pedals through to robot shark PCBs. We'll likely run it again sometime in the new year, so let me know if you're interested in coming along.