Recently, we have spent a lot of time and energy talking and thinking about open source social media, particularly Mastodon, and I have been writing an article about it all. It looks like it might end up as two articles, one as an introduction to people who have never heard of Mastodon, and another for those that are already passionate about it and may take issue with us joining.

Despite the possibility of leaving Instagram and Twitter for federated platforms, for the time being we're still hanging out there and I've been playing with the Instagram's 'Reels' feature of short-form video content. Wherever we end up, I'll still enjoy making these little clips and vignettes showing how we make stuff stuff and of some installations/demonstrations. Here's an example below - please forgive the aspect ratio, if you can. I'll start making them in a YouTubeable (or PeerTubeable) 16:9 as well as the smartphone-centric 9:16, which are both quite steep ratios for a rookie video maker!

Video description: An inset video of an illuminated liver bird display sits over a laser cutting timelapse making toothed cuts into MDF. It zooms out to show the finished box being fitted out with a circuit board and power supply, before being taken over to the liver bird & used.

What was I making this time? An MDF enclosure for the Electric Liverbird's power supply and My Baby's Got LED board, with bonus USB port to provide five volts to the LED matrix display which is currently set up to display the freshness of the DoES Liverpool coffee. Although when we plugged it in, we discovered the timer had fallen a little behind after the coffee machine's sonoff switch was AWOL (now returned).

Image description: An LED display with text reading 'coffee is 351hrs old' and an ESP32 hanging off the right side.

I used Adrian's recommendation of boxes.py to generate the enclosure design and it worked an absolute treat, with some 3mm PLA filament working brilliantly as an improvised hinge pin (thanks Russ!). And after using the burn test to get a tight fit, it went together pretty well without no adhesive, but plenty of hammer. 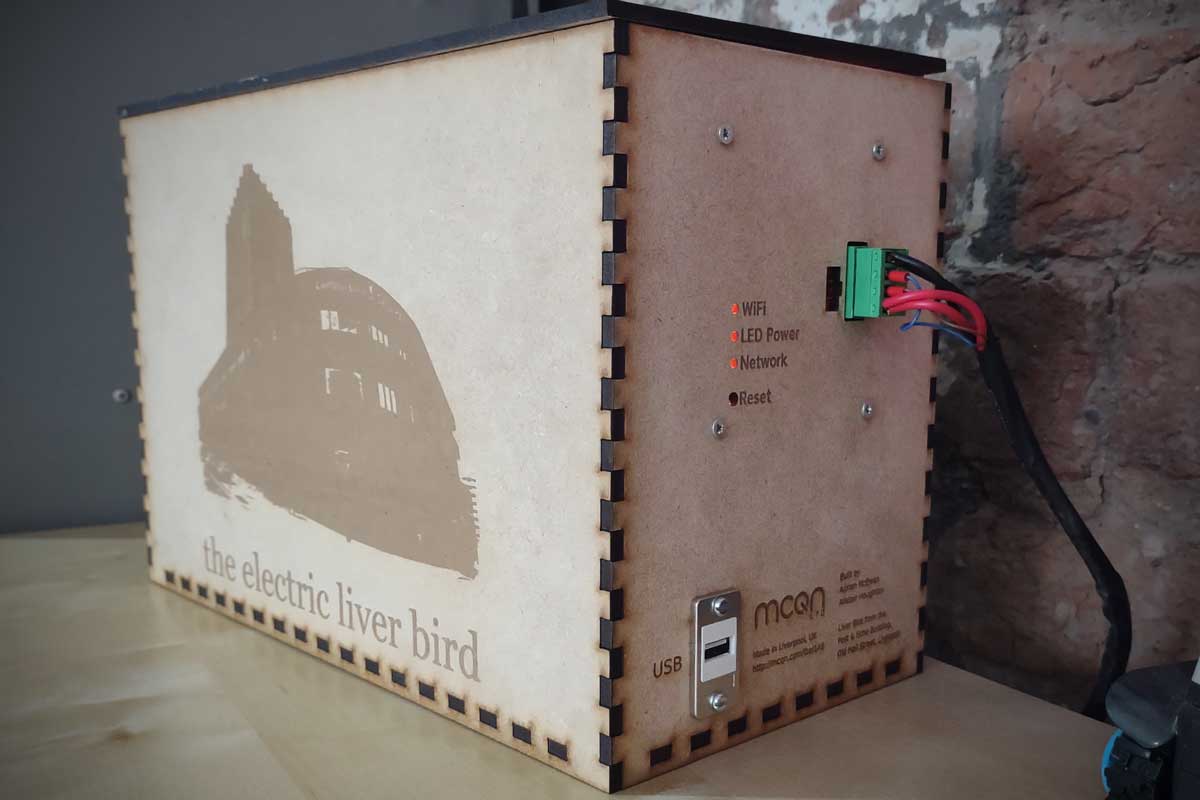 Image description: A wide angle close up of the MDF electric liver bird box, with an engraving of the Echo building on one of the front face above the words 'the electric liver bird' and some status lights and a USB port on the narrow side.

A week of nudging an assortment of things forwards. Got the annual accounts filed, and paid out corporation tax, and the testing/programming jig for My Baby's Got LED got to the point where it's ready for us to make the physical jig to hold the board. We're using the excellent Open Fixture tool, and have got the design files prepped. Need to book some time on the laser to cut it out next. There'll be more software to do too, even for the MVP, but it needs the electronics to be held properly before that can progress.

We had another day working on the teleprinter, so there's a new video out in that series. We got the carriage moving properly and got the loopback wiring set up so that it prints things when you type on the keyboard. It feels like the end is coming into view with that (famous last words...)

Video description: A narrated video showing the renovation of a world war 2 era teleprinter at DoES Liverpool, with Adrian, Mike and Paul.

And I've spent a chunk of time puling together an outline quote for some prototyping and first steps towards production for a medical device. Can't share much more than that, but it'll be a sizeable chunk of work if it comes off.