Less to report this week and not just because we're back to week-notes rather than three-week-notes. Both Arthur and I had some days off, making it a shorter-than-usual week.

Arthur further improved the My Baby's Got LED page on Tindie after some good feedback from friends and customers. It now does a much better job of explaining the product and showing what can be done with it.

Then, before heading off for a well-deserved break, he turned his attention to cases. Although the My Baby's Got LED boards are built to make it simple for non-techies to control lights, the bare PCB (understandably) makes the product look more techie than it is. He's started looking at simple options for how to mount the boards.

I had a couple of client meetings: one the start of a few days work for a longer-running project that needs to pull in my expertise from time to time; and the other more exploratory, for a meatier electronics-and-firmware project, that'll be interesting if/when it gets going.

And following on from Arthur's restocking the My Baby's Got LED store-cupboard last week, I returned to the sub-project to automate programming and testing the boards. I've now got a Raspberry Pi with all the required software installed to be able to pull the latest code, compile it and upload it to a board. 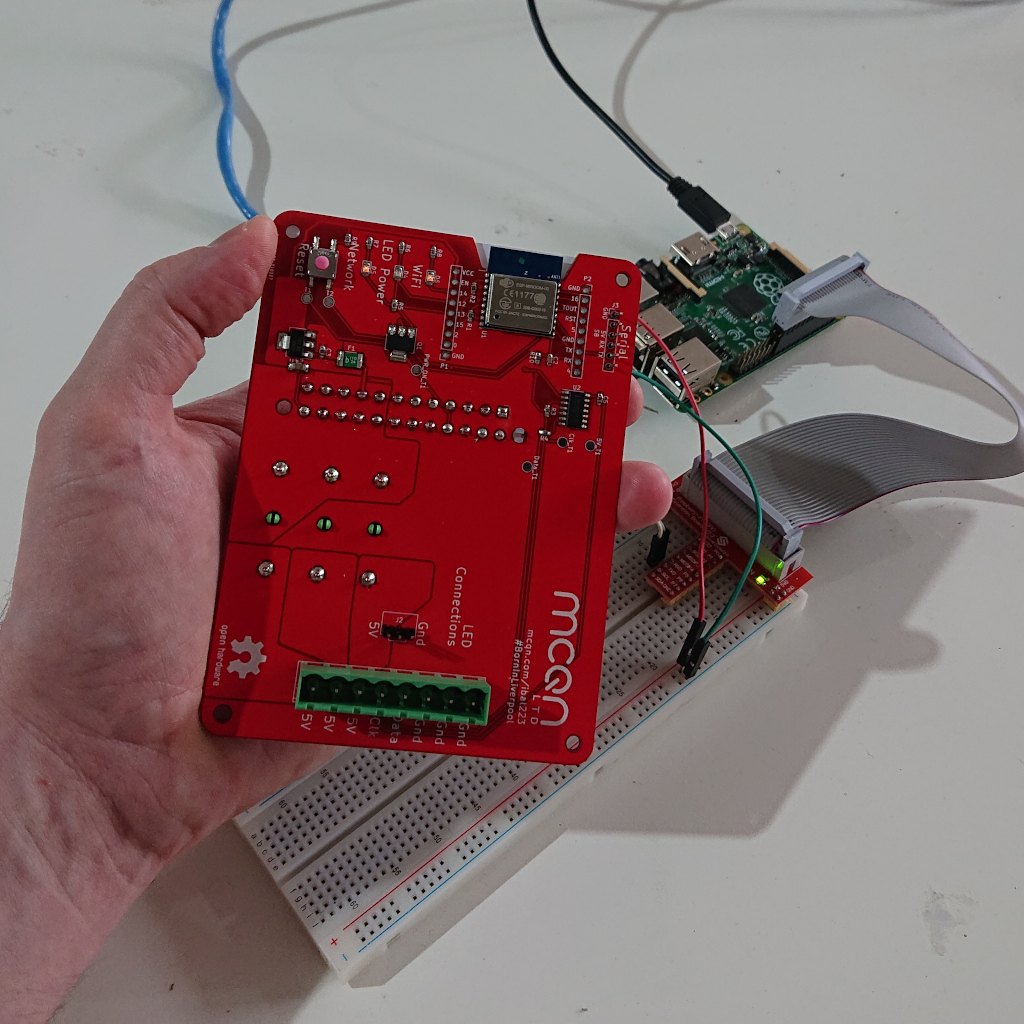 The Platform.IO build system (that it uses) takes around seven minutes to build and upload the code, which seems far too long—especially when you're holding the headers into the board by hand, which I am at the moment. But it's a good start. I suspect that a lot of that time is spent working out if anything needs to be recompiled, and it should be possible to split that into two operations so that the recompiling is done once-per-batch; and the holding-headers-in-by-hand is only going to be a problem for a short while longer, until the breadboarded wiring is replaced by a bed-of-nails jig that we'll just clip the board to while it's being programmed.

Aside from the day-to-day work, I've also been thinking about the platforms we use, and wondering which ones we should be focusing on.

This was triggered in part by Instagram's continued user-hostile insecurity, most recently their decision to put everyone's content behind a paywall. That was the final nudge I needed to stop posting on my personal account.

The other part is the centralisation and over-reliance on a few giant corporations, as the Fastly outage reminded us a few weeks back.

I'm much more interested in restoring the web we lost.

At the same time, as ever, it's the people rather than the tech that are important, and right now you're all hanging out in the wrong places 😜. We need to find people where they are, rather than where we'd like them to be, and I don't want to make Arthur's job any harder than it already is.

That said, I do wonder how much effort we should be spending building a presence on Instagram or YouTube or Twitter, and whether there are better places that we should be adding our weight. I don't have any answers now, but it's something we'll be pondering more.

This is the point where I'm supposed to encourage you to like and subscribe, right? You should check out our RSS feed instead!