This week has been similarly fragmented as last week was, but I'm feeling better about it, I think because there's been some progress made.

Not on everything, the charger-circuit debugging has had two tiny soldering operations and two more tests spread across the week, with neither fixing the charging-LED-stays-lit-forever bug. I'm running out of things to try on that, so will need to bring the task more into the foreground and devote some time and thought to it.

But I got the OS install working on the new (to me) server bought for ibal46 and got to grips with ZFS. And then ordered a bunch of new disks for it, which have arrived, but I've not done anything with. This coming week I should get the remaining parts I need for it specced and ordered, then maybe I'll start talking more openly about what I'm up to with it. (Sorry about that).

And I finished off the Ansible scripts to provision a Pi to monitor AIS messages. I'm not doing anything with the data yet, although there's something useful published for others to use. Once it can feed data to one of the online services, and act as a source for Merseyshipping I can put this project to bed, which would be good, to get it out of my headspace. I did get to visualise what I can receive in my flat better—the range is pretty good, but not quite far enough for Merseyshipping. The plan is to site it at DoES Liverpool, which is a mile nearer to the mouth of the river and also higher up, so should have better coverage. 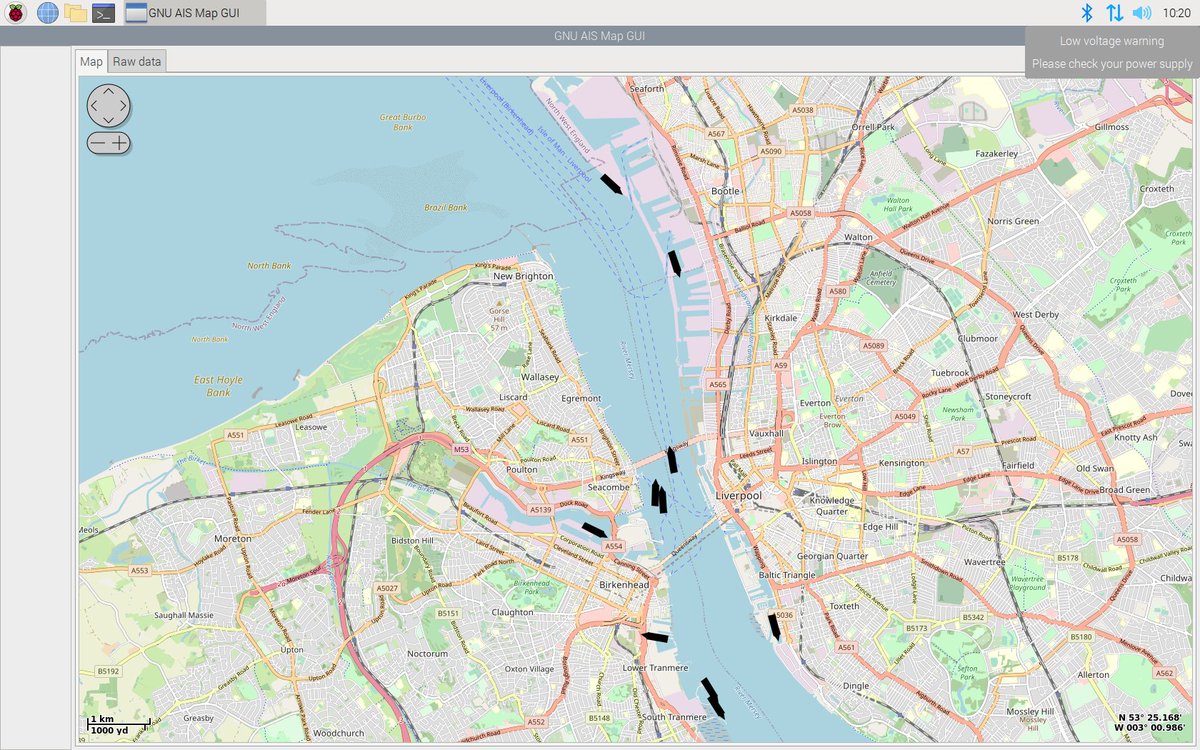 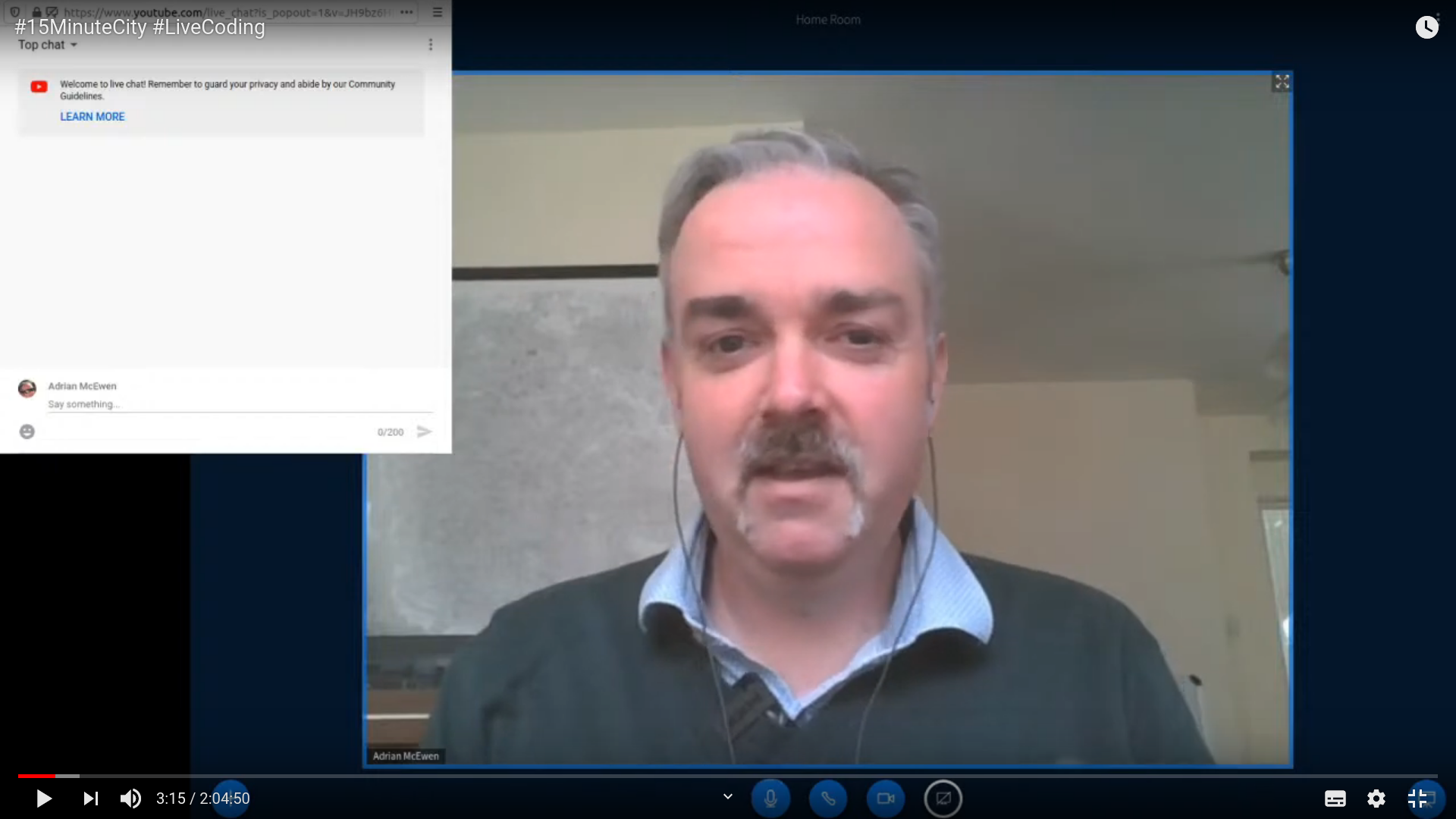 The week kicked off with another Live Coding session. I had a free weekend, and hadn't moved things on with the 15 Minute City explorations for a while. Some of that was down to stalling while trying to work out the right way forwards on making a custom tileset for it. The live coding worked surprisingly well to work through that—being live on camera meant that I couldn't dwell on or procrastinate over making decisions about it, and I made a decent amount of progress as a result. The output doesn't look much, but the underlying decisions and scaffolding are a good step forwards.

The video of the session is available to watch back (although another thing I learnt this week is that if I'm charging my new wireless mic it generates an annoying tone across the audio, and sadly I only discovered that after the recording was over).

A quick scan of the catalogue shows a total of 222 projects over that period. Forty percent of those were client work and another thirty percent were talks or workshops. Nearly a tenth were explicit contributions to assorted open source libraries and projects, on top of any bug-fixes and the like done during client work. It's good to be commoning. And just over five percent were our own products.

Those numbers don't really scream product company, despite that always being my interest and intention. To be fair, the product-related projects are much bigger and longer-running than any of the other work I undertake, so it's quite a sensible distribution. However, I've been looking at the proportion of my time, and the proportion of income for the company, for client work versus product work and that is something that I want to nudge more in favour of products.

As a society, we need to electrify all of our energy usage; move away from using plastic wherever possible; and build a more equitable and cooperative world. To paraphrase Richard Hamming, these are the most pressing questions for my field of work, so I should be working on them.

It probably isn't at all clear how the work I do can claim to be a response to those ambitions.

These are huge challenges, and we need to work out how to move all businesses along the journey. I think the work is hard, and lots of the detail will only get flushed out as more of us work through the issues and share what we learn. It's easy to write manifestos and lists of ideals; it's hard to implement them, but that's the only place they do any good.

It's not about making worthy products, it's about finding ways to make all products not destroy (and preferably also repair) the Earth. I wrote more about choosing what to make a few years back, in the early days of the Ackers Bell development.

I think that work is a bit easier with the extra flexibility and control of our own products. However, that brings in different challenges when I'm working out what the company needs. I'm good at initial ideas; developing them into products; and finding/building the supply chains to make them. The major gap is in how to connect that through to people who want them.

So that's what's exercising my brain of late. Do I need to learn more about business development, or marketing, or sales, or...? How do I find the right people to fill those gaps? Answers on a postcard please...