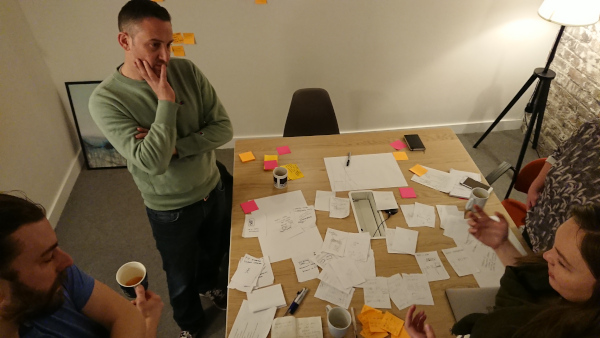 Having known Matt Edgar for years now, I’ve watched with jealousy and curiousity as the Leeds Service Jam has grown and shown a community of designers how to build services better. Viewed from afar (and through the Internet), I wasn’t quite sure what they entailed but they obviously drew together a set of interesting and interested people.

Two of those people were Joe Bramall and Isobel Seacombe and last year they decided to bring the main event in the Service Jam calendar, the Global Service Jam, to Liverpool.

I didn’t make it along last year and was hesitating about attending this year too, when I got chatting to Joe one of the days he was working in DoES Liverpool. I wasn’t sure if it was something just for Designers or Service Designers, and also a bit worried about the “secret theme” for the weekend. Would that force me to spend a weekend working on something I had no interest in?

Joe assured me that it was aimed at anyone interested in learning some new problem-solving and design thinking techniques, and that the theme was really open-ended and just a way to generate a bunch of varied projects to work on.

The theme for this year’s jam was “blue”. On the Friday evening warm-up session we had a bout of word-association around that, and drew it down into four topics of interest from which we could form teams. We had water and sky (air) pollution; gender stereotyping; mental health; and Everton. Definitely putting to bed my fears that the theme would be a problem!

Each team had at least one experienced user-centred designer or service designer on board, so none of us were stuck wondering what we should be doing; and Joe and Isobel did a great job of checking in with all of us regularly to find out about progress and offer pointers and nudges to help keep us moving.

You can get a feel for the sort of techniques and tools that we brought to bear over the weekend in the GSJam Toolkit developed by the Leeds crowd or Joe’s write-up of the Design Manchester Service Jam.

I joined the Everton team, and we explored how we could build links from DoES Liverpool’s home of the emerging Fabric District to our neighbours the other side of the Islington dual carriageway in Everton.

We got out on the streets and talked to the public about the area; brainstormed all manner of approaches that we might take; went and explored the routes across Islington into Everton; did more brainstorming and ideation; pulled in some expertise from the Fabric District CIC; and frantically assembled everything into a slide deck to present to the rest of the Jam on the Sunday afternoon.

It also gave me the opportunity to try out an idea I’d had a while back for encouraging discussion about an area before the planning applications start to fly. It’s a simple experiment of putting up some signs (I knocked them up quickly on the laser-cutter) with a site-specific hashtag, and then seeding the hashtags online with a couple of comments and questions. I’ll be keeping an eye on #IslingtonDivide over the coming weeks to see if it gather any more discussion. It has sparked some already. 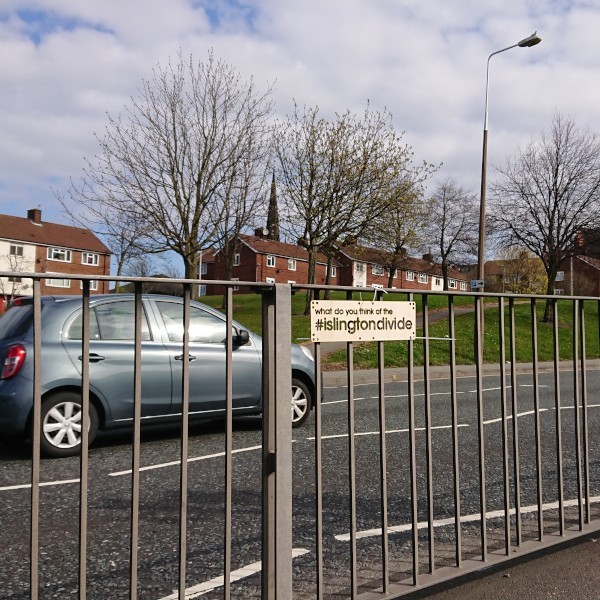 Check out our Fabric District: stitching the community together slide deck if you want to see/read more about our work over the weekend and the ideas we came up with.

It was a busy, but really enjoyable weekend. I learnt some new things, met some new people, and we might make our area a bit nicer too.

When’s the next one?