Hello, Arthur here. Following weeks of secret negotiations, and mysterious references to a new employee, week 801 started with the official announcement that I had joined the company, to a warm reception from our twitter followers and friends.

Thank you for the welcome - it's good to be here!

Adrian brought me into the fold to help increase the capacity of the company and to move the product side of the operation forward. He has been busy developing products since the inspired Bubblino, with some nearing production like the Acker's Bell, and some available today like the My Baby's Got LED boards (on Tindie!).

I'll be doing my best to get these into people's hands. But before rushing straight into scattershot sales activity, we spent some time clarifying the difference between McEwen the man (the myth, the legend) and MCQN the company.

This is a work-in-progress but here's a recent draft: MCQN is a design studio that affords individuals and SMEs the advantages of automation without compromising on privacy, security, ethics and sustainability. Does that sound about right? 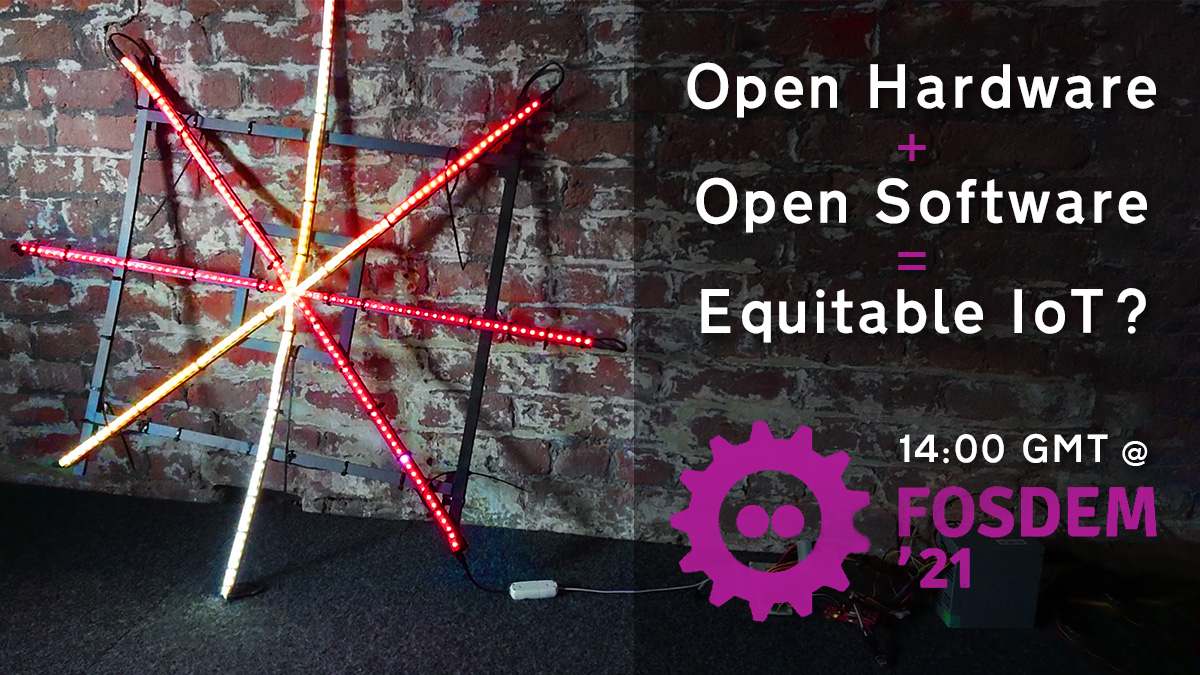 These weeknotes took a backseat to the promotion of Adrian's FOSDEM talk on Open Hardware and Open Software.

The talk was a good opportunity for me to tune into the philosophy of the business, as well as hang out in the open source community attending FOSDEM (virtually).

It was also a good prompt to sort out the practical stuff - to gain posting privileges on the social media accounts and hash out a workflow for turning ideas into posts. It took a lot longer than I expected!

My approach was to take notes while watching the talk - of the main points, quotes and any organisations or projects that came up - then synthesise all that information into some key messages, graphics, and a timeline of posts to go out over the weekend over Twitter.

These first posts were pretty straightforward and felt a bit stiff and corporate compared to the blog posts, but I'm sure my version of the company voice will relax with practice. The response was modest but positive, with a nice write up in CNXSoft of the talk and the My Baby's Got LED board. And on Monday, we even made a sale - ring the Ackers Bell!

My Bird's Got LED 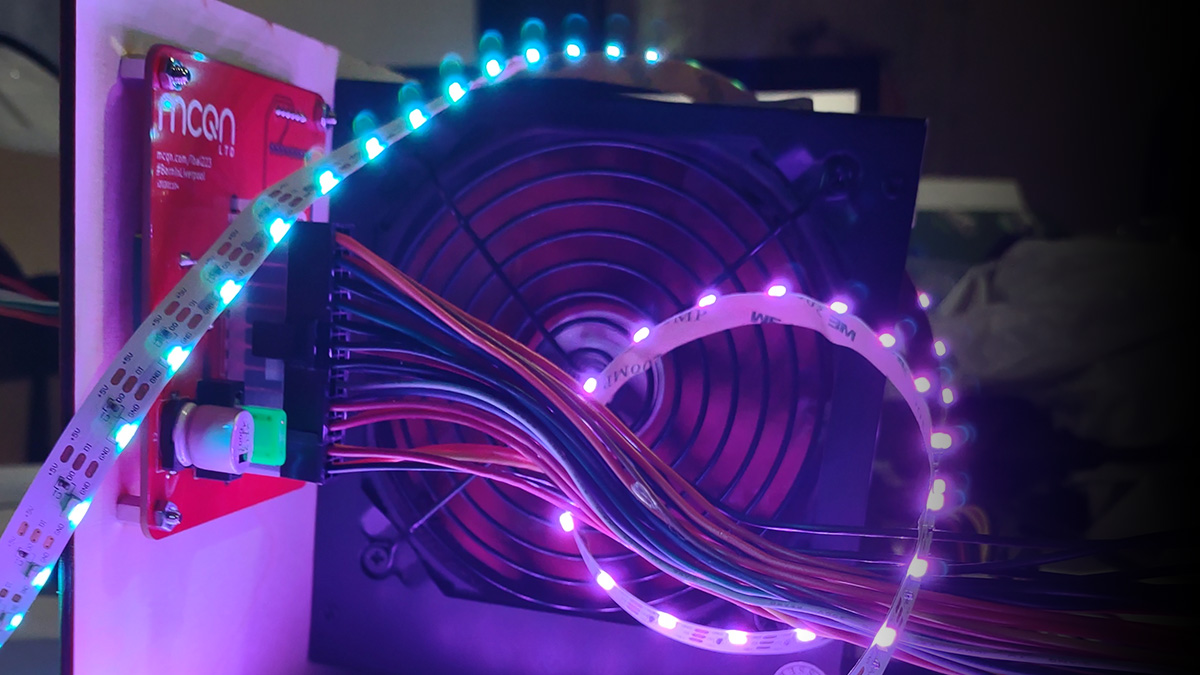 One of my main jobs at the moment is to find good homes for the My Baby's Got LED boards. And first on that agenda was to get my hands on a board and have a go.

After pinching myself that this was now my job, I took a development board and plugged it in to an ATX power supply and an LED strip. That's basically it for set up - after connecting to the board's own wifi network, the WLED interface pops up ready for action. But this board does way more than let you control it from a smartphone - it can talk to the outside world.

During lockdown I'll be mostly working from home, but since I needed to go to DoES to pick up the kit, we took the opportunity to light up a Liver Bird which had fallen out with its Raspberry Pi and Arduino. It also fell off its perch at one point, but that's another story, and another repair. Adrian swapped the boards out for a My Baby's got LED, connected it to the DoES WiFi network, and we were ready to fly!

By default the software assumes there are 30 LEDs on the strip, so I set this to 150 in the settings to match the number of Neopixels set up inside the Liver Bird. Next up was a crash course in MQTT jargon, before jumping on the node.red instance set up by the DoES community.

My preferred learning style is 'fumble around in a live environment', so I got stuck in updating the flows with some buttons to turn the lights on, off, red, bright, and so on. Like so much open source software, it feels like other people have done all the hard work. 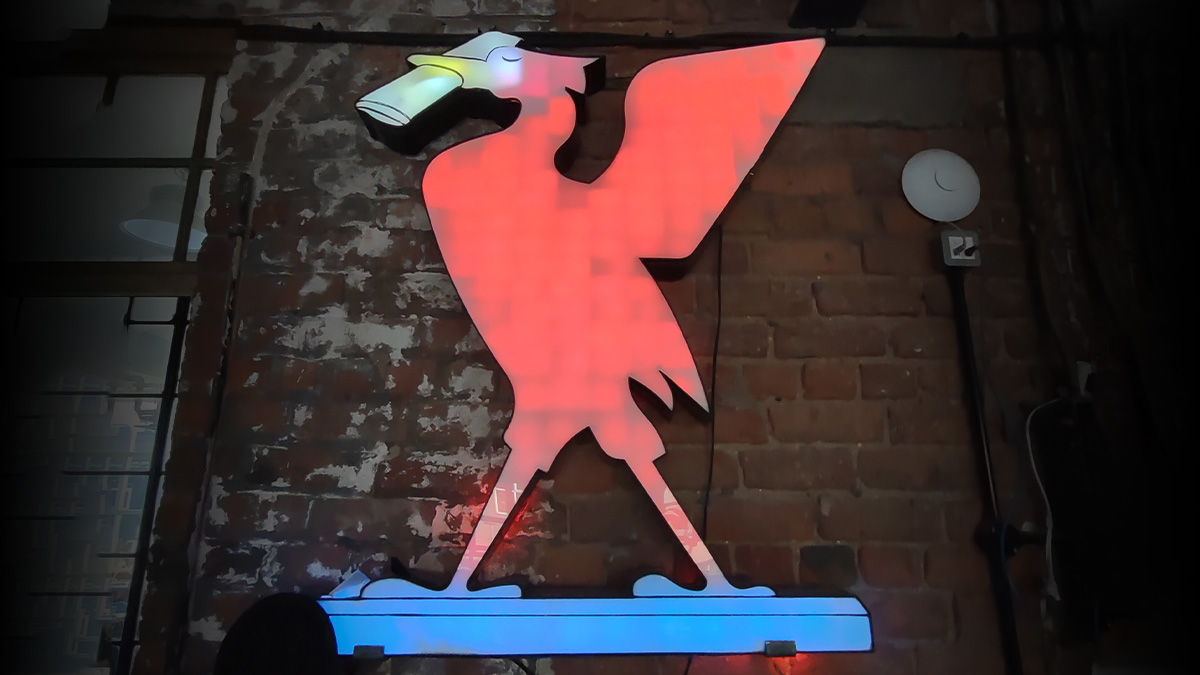 I also investigated an alphabet onslaught - the WLED HTML API. This lets you change a few things straight from the address bar of a browser by tweaking parameters in the URL. I also installed Curl on my laptop to change things via the command line, which always feels like the real deal even with the most basic of commands. The JSON API looked versatile, but was a bit beyond me!

Now familiar with the basics, I'll be hunting down the people who have bought one so far to see what the boards are up to out in the wild.