Another week of PCB-focused work, as I continue to push forwards on the new plug-and-play addressable LED controller.

I haven't been completely head-down-in-Kicad though. As I want to get a product listed for it on our Tindie store sooner rather than later, some of the work has been in preparation for that. I've worked through the bill-of-materials, finding suppliers and part numbers for everything in the circuit. That will make it easy for me to place the order—whether I'm buying the parts myself, or passing the information onto a PCB assembly house—and also lets me work out how much it will cost to build one, so that I can in turn work out how much to charge for it.

There's only one component that I haven't got squared away now: the 3-pin connector to mate with the standard one used on almost all Neopixel light strips. Frustratingly, that's a wire-to-wire connector and the manufacturer doesn't make a wire-to-board equivalent. I spent most of Friday afternoon asking around on Twitter and searching through possible alternatives and poring over their datasheets to try to work out which might do the job. I've ordered a bunch of samples of possible candidates which should turn up on Monday. Hopefully one will do the job.

On the Kicad front, things have also moved along nicely. I created a new footprint for the ATX power connector (and documented it for the PCB course while I was at it), and have worked through most of laying it out. This is what it looks like so far: 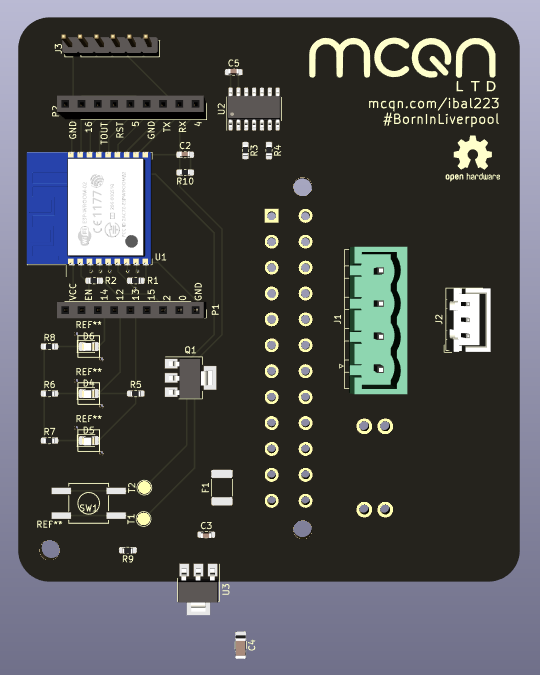 As you can see from the two components at the bottow which aren't (properly) on the board, there's a bit left to do, and there are a few other tasks to tick off that aren't so visible. Plus the placeholder 3-pin connector will be replaced once I know the correct part for it. With luck I'll have it all sorted and can place an order for them on Wednesday.