Last Wednesday evening saw the third Internet of Things London meetup, and I was honoured to be asked along to give one of the talks. It's great to see such a group generating such interest - the event was a sell out, and some seventy or eighty people were shoehorned into the Centre for Creative Collaboration.

Alex pulled together a real mix of talks: alongside mine there was Paul Egan talking about Neul's innovative industry-scale comms network; Maurizio Pilu giving more of a Government angle on IoT; and Richard Oliver and Ken Boak presenting their respective wireless sensor solutions - the Multipoint Wireless Sensor Network and the Nanode/WiNode.

As promised on the night, here are my slides - along with the notes I made while pulling them together. They're notes, rather than a script, so only bear a resemblance to what I actually said, but hopefully the general points will come through. The first slide is here, and the remainder follow after the jump... 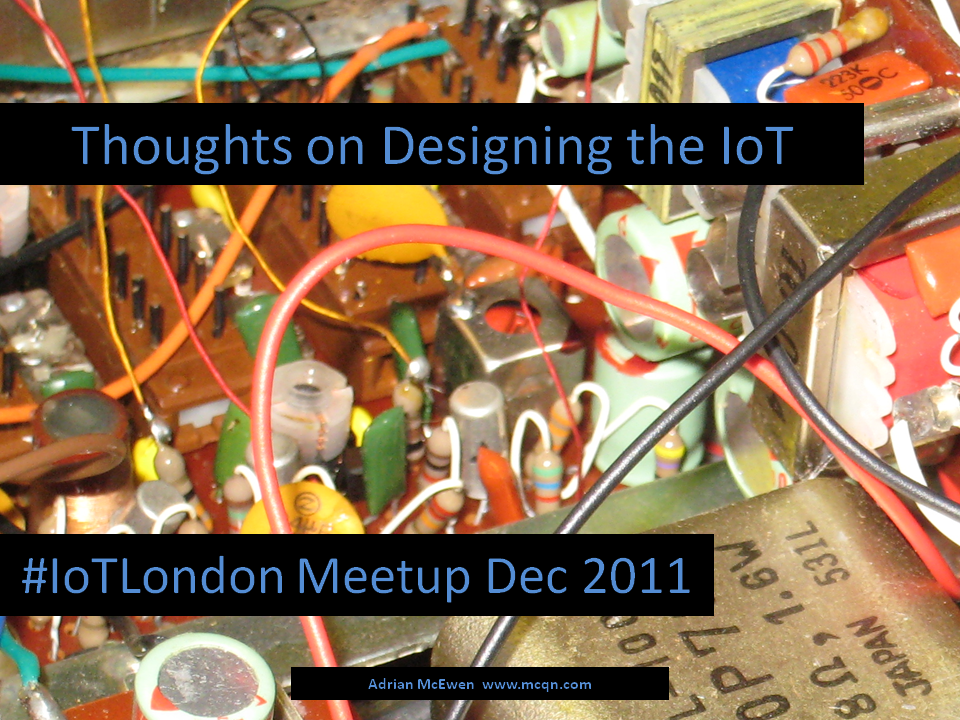 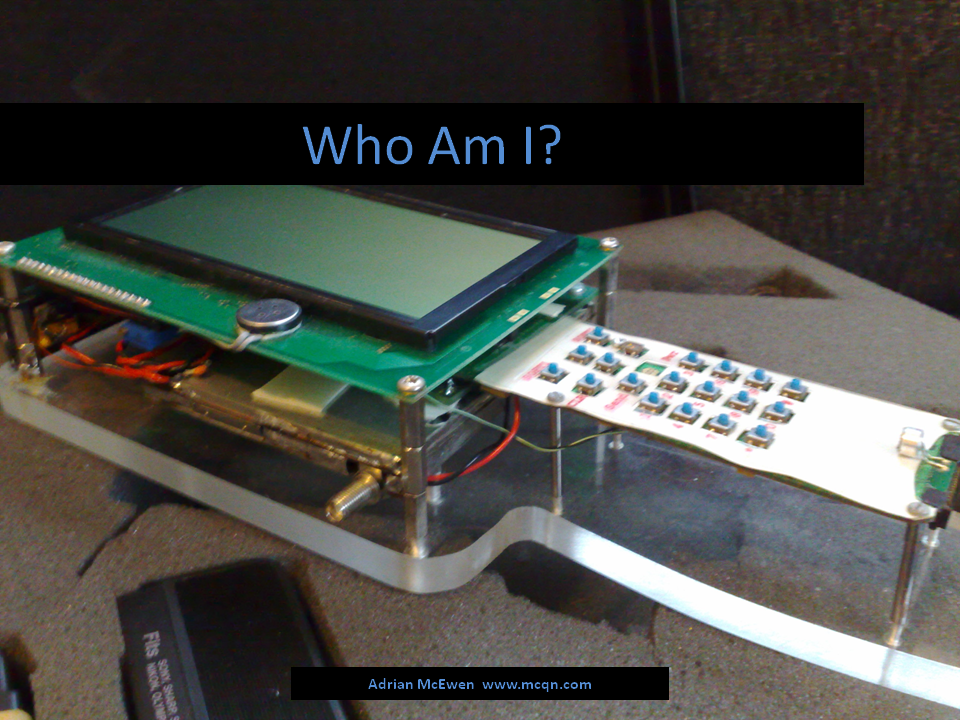 Hello, I'm Adrian McEwen. I've been adding the Internet to things other than computers since 1995. Initially cash registers, then PDAs and mobile phones - back before smartphones existed. The picture in the background is of the first ever web browser on a mobile phone, built by STNC - a startup from Cambridge that I joined in 1996. We got acquired by Microsoft in 1999 when they started getting into the mobile arena.

In 2002 I left Microsoft and since then have been running my own company - MCQN Ltd. We've worked on web browsers for set-top boxes and since 2008 have been focusing increasingly on physical/ubiquitous computing, particularly with the Arduino platform and interfacing that with the Internet. Just recently I became the official maintainer of the Ethernet library for Arduino. 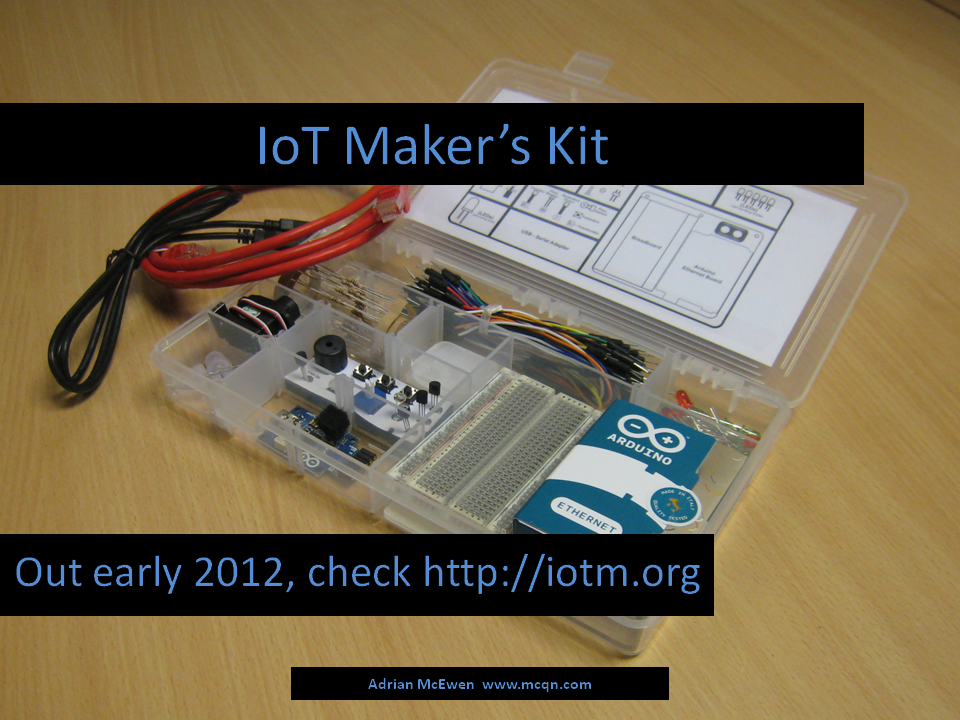 Before we get into what I want to talk about, a brief commercial interruption.

Together with .:oomlout:. we've developed the Internet of Things Maker's Kit. It's got everything you need to start playing around with the Internet of Things - an Arduino Ethernet, LEDs, servo, etc., and comes with eight examples to get you up and running with Pachube, talking to Twitter, etc. We're just finishing off the layout of the booklet that comes with it, so it should be available early next year. Keep an eye on http://iotm.org to find out when it launches. 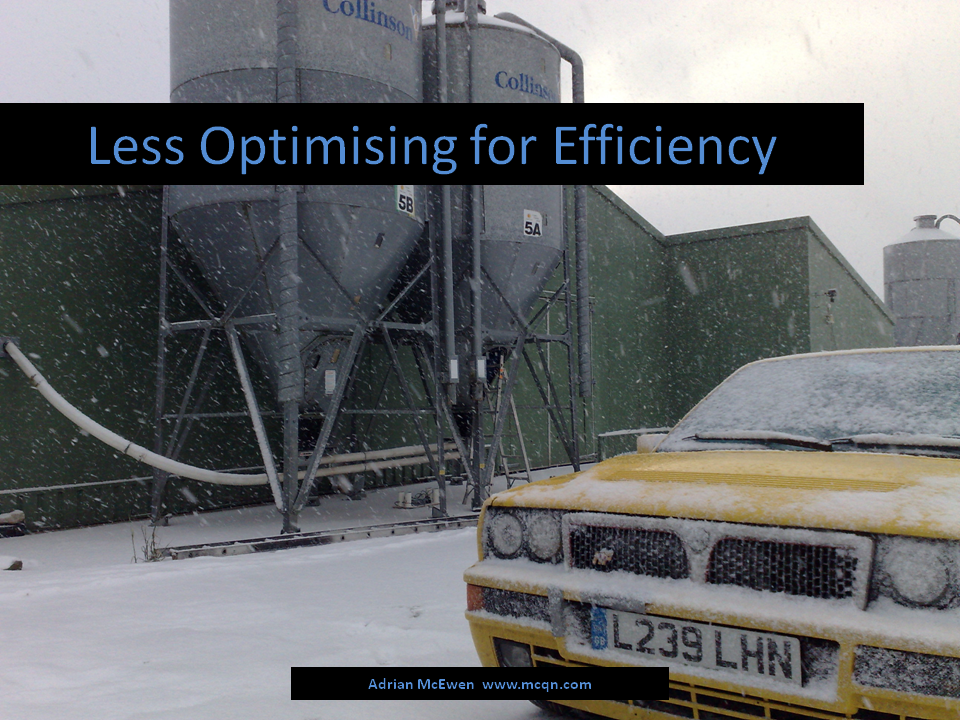 A lot of the drive towards the Internet of Things is coming from the established industrial, process control field, and as the costs of the sensors drop then it's pushing into more areas of our lives. The problem is that that field is focused on efficiency and cost control. There are definitely areas where that's still important... 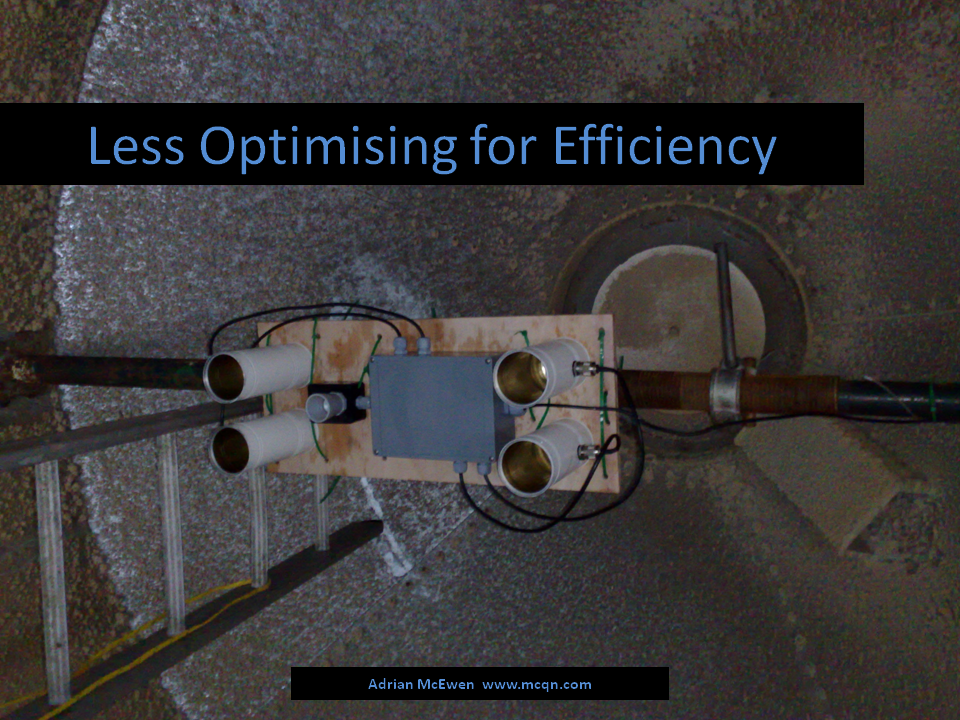 ...for example, these photos are from an R&D project we did to stick a load of sensors to monitor the food levels in silos on a chicken farm, and that was all about knowing when was best to send out a truck full of chicken feed. However, as this technology bleeds into everyday life... 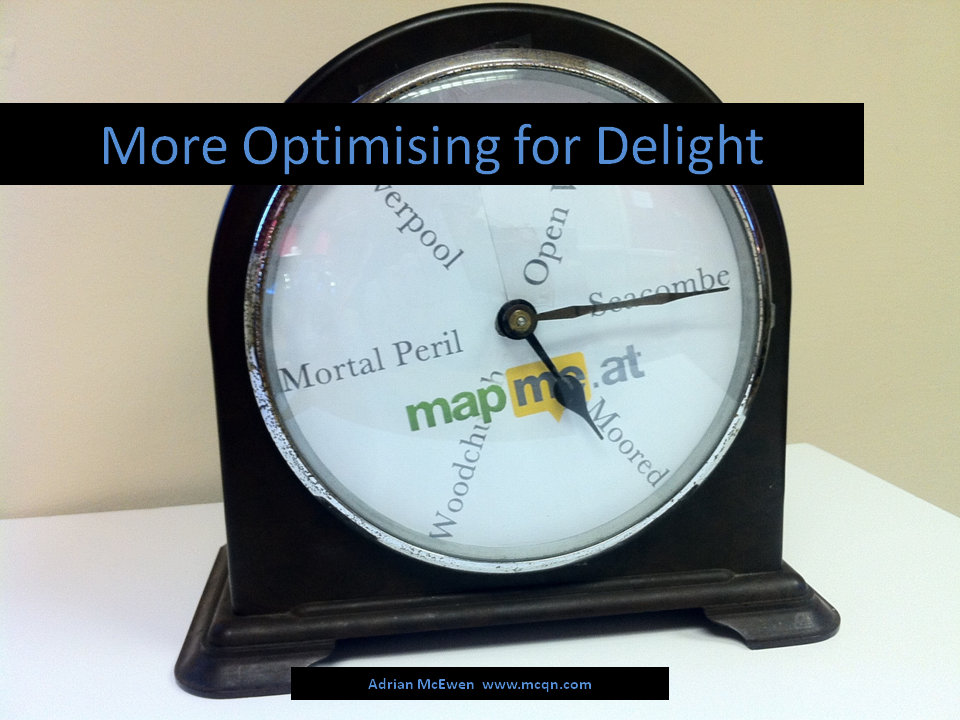 ...we should be building devices that delight people. This is the mapme.at clock, and in this instance it's showing the location of the Mersey ferries. An LCD display would be efficient, but one like the Weasley clock from Harry Potter is much lovelier. And actually, John McKerrell, who made this and is here this evening, is now taking pre-orders for a slightly simpler design called the WhereDial, so find him and ask him about that. 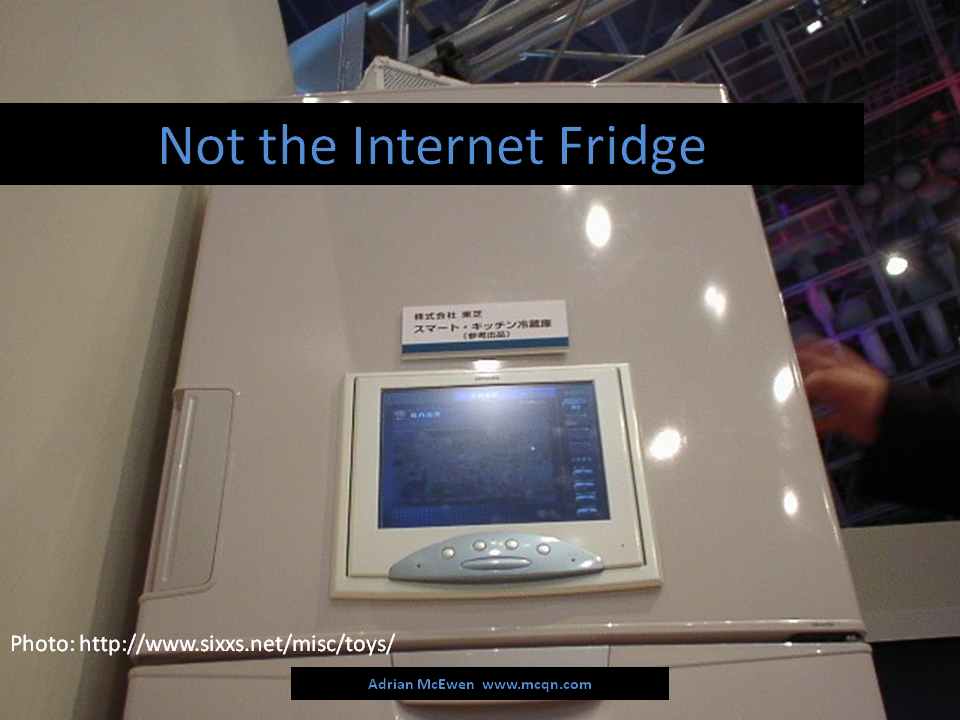 This isn't about the Internet fridge, in fact, I'm starting to think that the leading edge of home ubicomp isn't the kitchen, but rather... 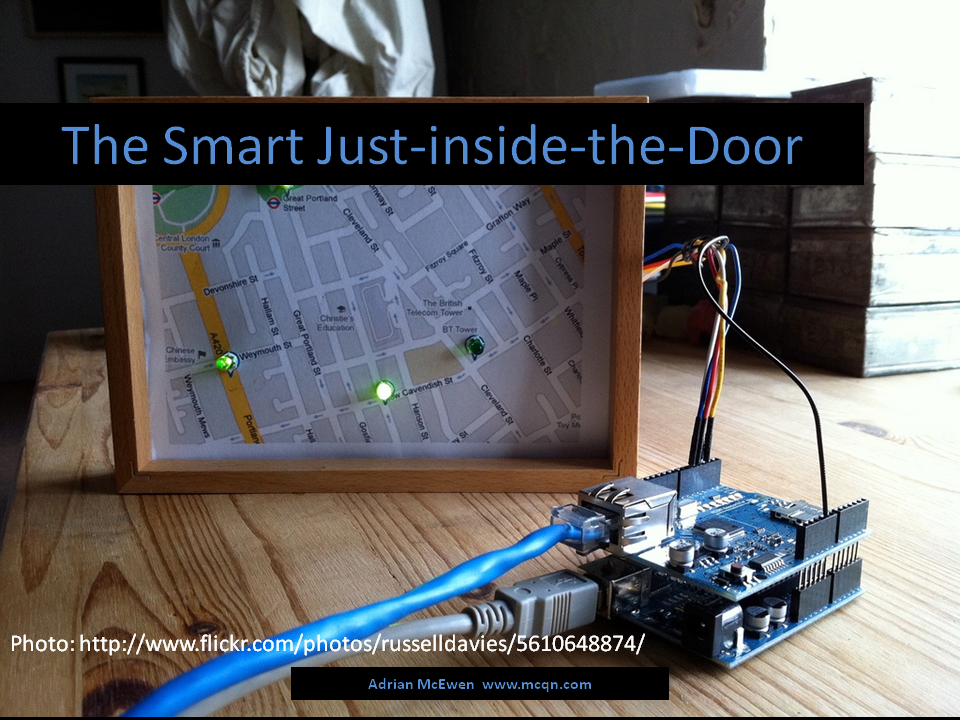 ...next to the front door. This is Russell Davies' Bikemap. He built it as part of the Homesense project that Alex ran, and it shows which Boris bike stations near his flat have bikes available, so he just glances at it on his way out of the door. There's something about technology being useful just as you're about to change contexts. Tom Taylor did something similar with his Internet-enabled receipt printer that spat out his appointments, to-dos and the weather for him to grab on his way out. And the number of times I have to go back in and double-check that I've turned off the hot water as I leave the flat, I need to add an ambient orb energy monitor to see on my way out. 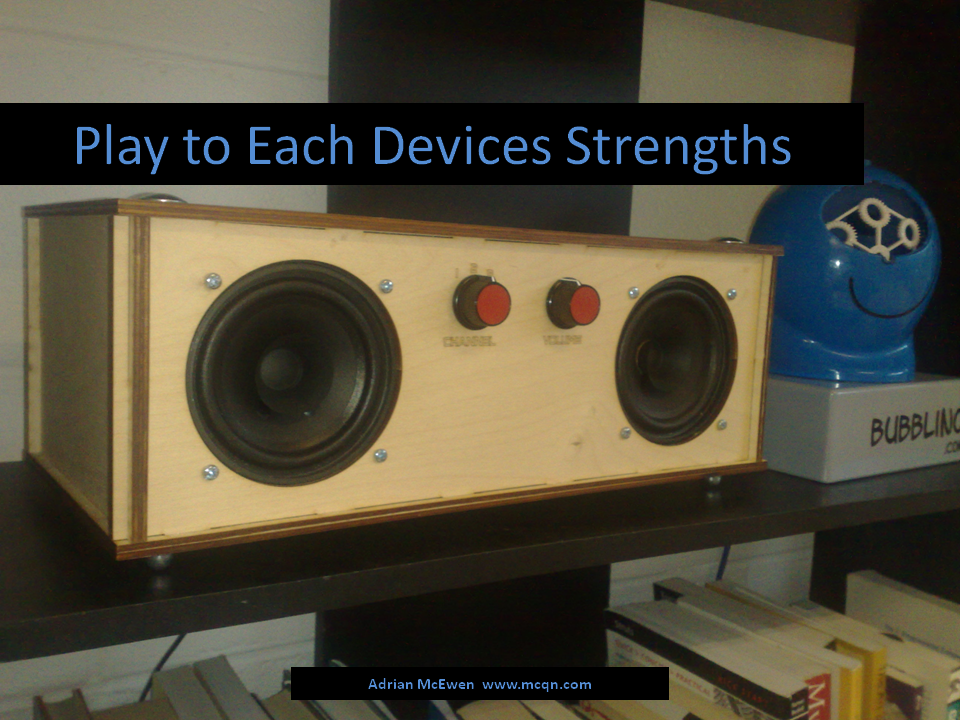 The key is to focus on what you do well - rather than try to do everything (often badly), use the fact that you're connected to leverage other devices. This is the Soundbox, something we're building for Russell. When you turn it on, it connects to the Internet and starts streaming music from one of three channels. You can change channel and control the volume, but that's it. Any screen or keyboard we'd have added would be a poor substitute for the phone or laptop that Russell's already got, so he uses one of them to set things up, and the Soundbox gets on with just playing music. 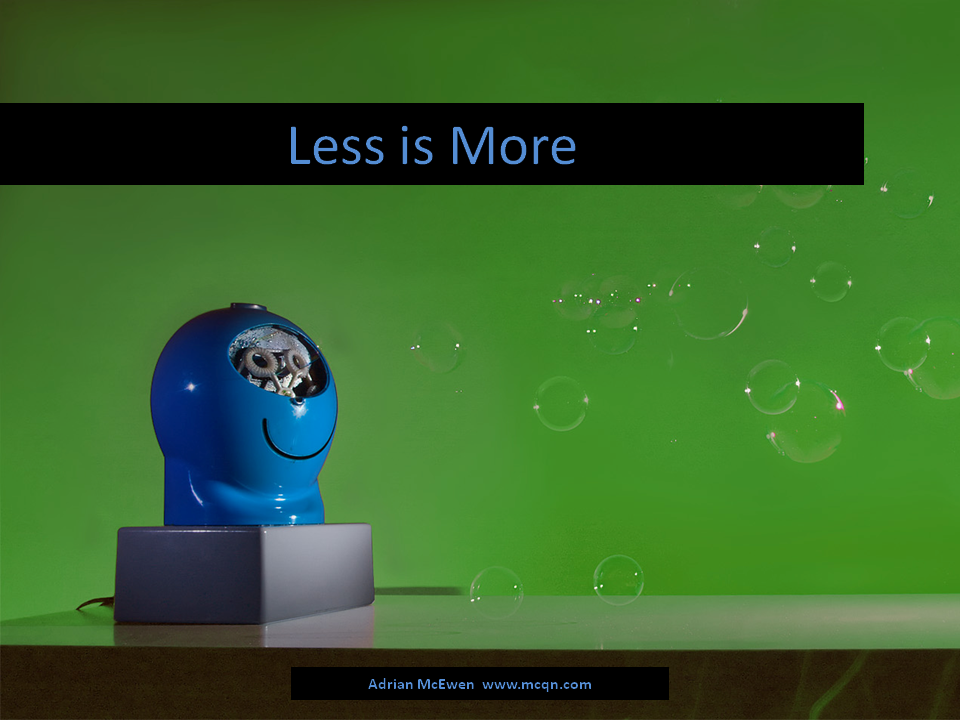 Bubblino has a similar focus. We could add a screen to show the text of the latest tweet, or some buttons to send responses, but they would detract from the simplicity of blowing bubbles. If he goes off, and you notice, then you can easily check on your computer or phone, and that will already be set up and logged into Twitter for you to reply. Keeping him pared back means that he's also easier to ignore, if you happen to be busy. He sits in your peripheral vision, so if you're concentrating on your screen then he won't interrupt. I think that's something that will be increasingly important if, as everyone predicts, the magnitude of the Internet of Things is realised. I don't want every object in every room to be clamouring for my attention.

We need to remember that in all of this, it's the people who are most important. 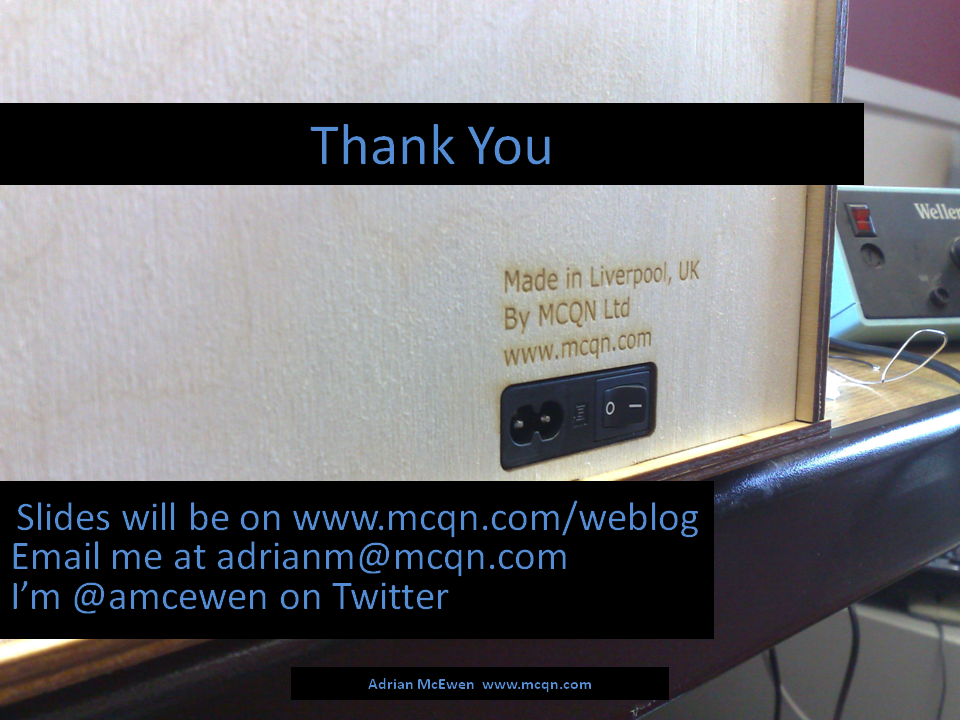