The Liverpool Chamber of Commerce invited me to speak at their Insight11 digital marketing and communication conference, which took place yesterday. I tried to give a flavour of how the Internet of Things can help organisations produce interesting, different and engaging ways to connect with people, and my slides are below. I've included the notes that I made while preparing my talk, although they probably bear little resemblance to what I actually said on stage... 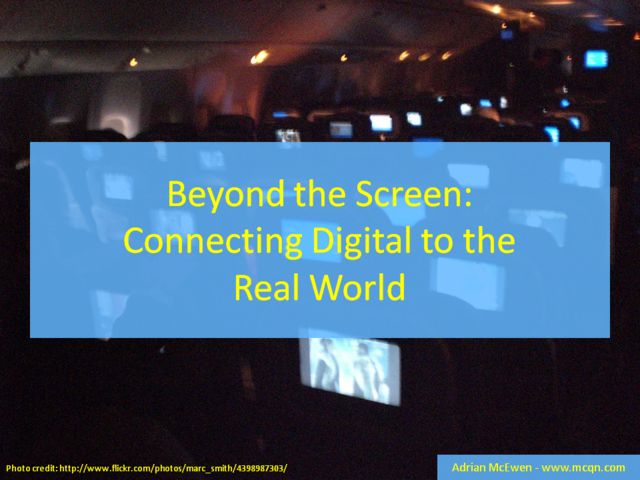 Hello. Thank you to the Chamber for inviting me to speak here today. 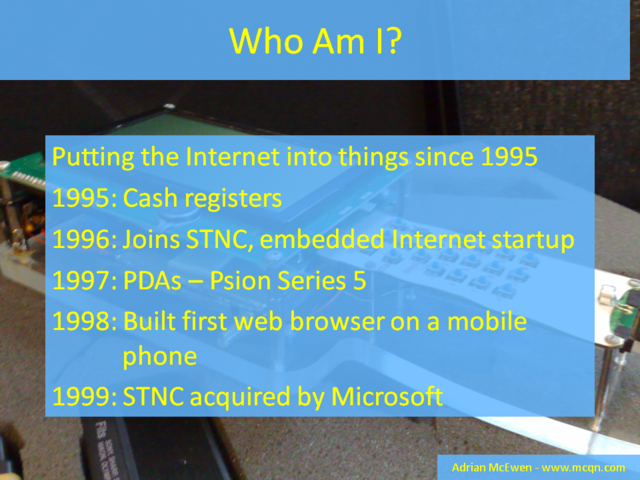 I'm Adrian McEwen, and I've been connecting things to the Internet for over fifteen years now. Initially cash registers, then the first ever web browser on a mobile phone (that's the first prototype that you can just make out in the background of this slide) 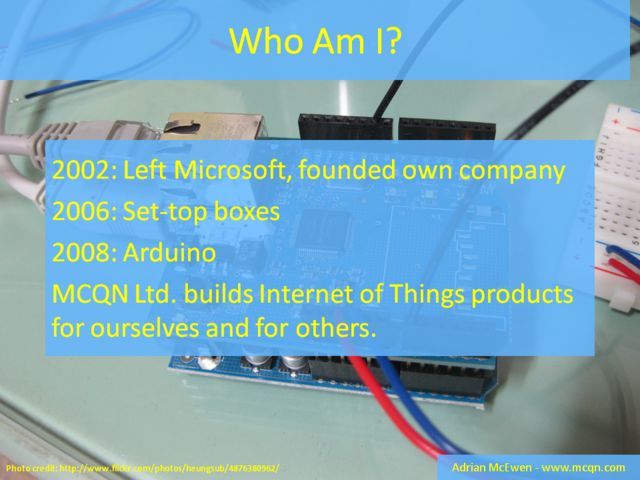 More recently set-top boxes and for the past couple of years all manner of sensors, toys and bits of furniture.

I run a company called MCQN Ltd, based here in Liverpool, which develops products and also builds these sorts of things for other people.

The title of my talk is Getting Beyond the Screen. What do I mean by that? Well, with all laptops, tablets and smartphones we seem to be developing a fixation with little glowing rectangles. We've heard from lots of people today who can produce some wonderful things for those screens, but I'd like to talk about the sorts of things that are becoming possible when computing starts to bleed out into the fabric of our surroundings. 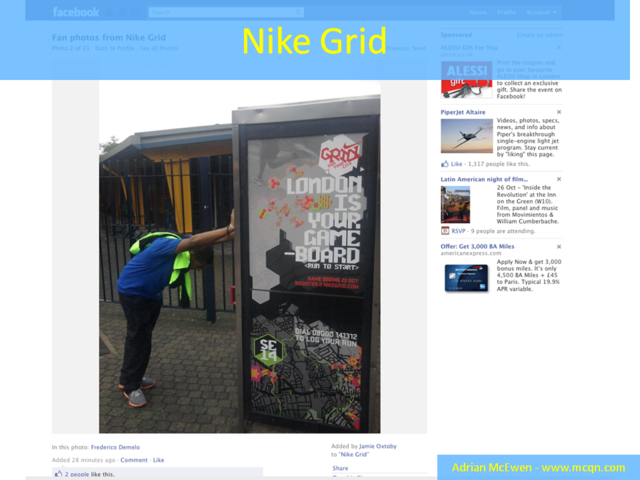 But before we get to that, I want to show an example of what you can do with some imaginative thinking around some very old, existing technology and infrastructure.

This is Nike Grid. It's a campaign that's run twice now in London, to engage people with one of Nike's core values - running. It's a social game with the usual website, and Facebook integration, but what's ingenious is how the game is played. They picked a load of bog-standard phone boxes around the city, and covered them in what looks at first glance like the standard advertising for the game.

Players dial the number and enter their ID code. Then when they hang up the clock starts ticking. Then they run the route to another of the phone boxes and follow the same procedure to log their finish.

It's brilliant. It doesn't need any fancy hardware to take part, and brings the players focus back from an app to the city where they're running.

Now that's a bit different from the rest of the examples I'm going to show, in that it doesn't need any new technology, but it shows how you can come up with something remarkable if you start to think about how things could work without a computer or smartphone as the central component. 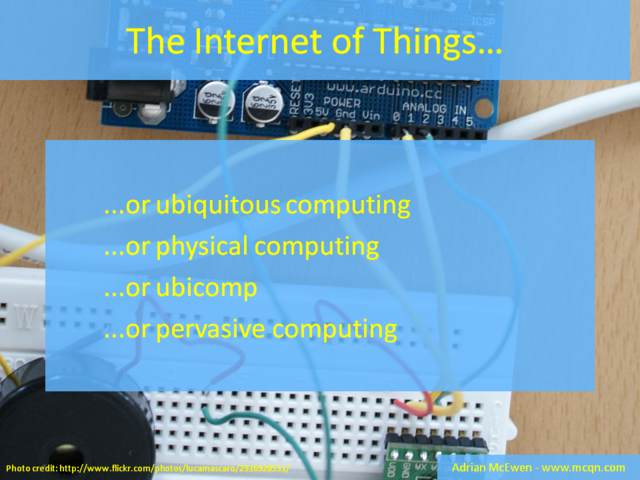 Right, onto the ways that technology can help with this idea of escaping screens. It's a relatively new field, which explains why there are so many terms for it, but the Internet of Things seems to be the one that's gaining the most traction, though as we'll see, they don't always have to involve the Internet. 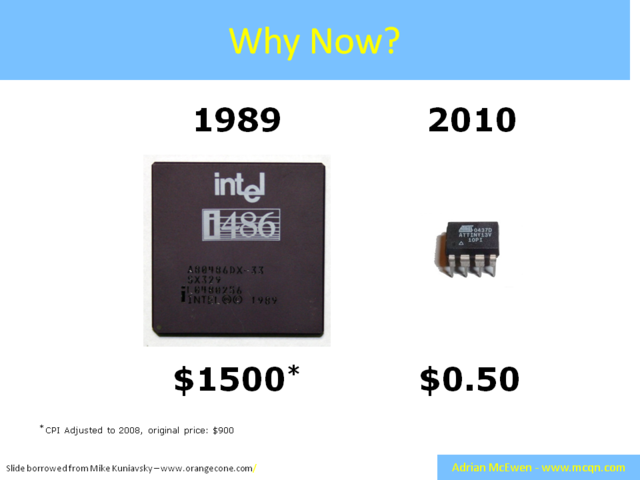 Why now? As with most developments in computing, it's down to Moore's Law, the rule that says that computers get twice as powerful every 18 months. But rather than focus on the most powerful end of the curve, the Internet of Things is driven by the long tail of Moore's Law.

In 1989, a 486 was state of the art, and cost $1500 just for the chip. Yet that was when PCs got powerful enough to hook up to the Internet. Last year, for 50 cents you could buy a chip that's got the same horsepower as that 486. That means you can start to think of adding that sort of Internet-connecting behaviour to all sorts of objects... 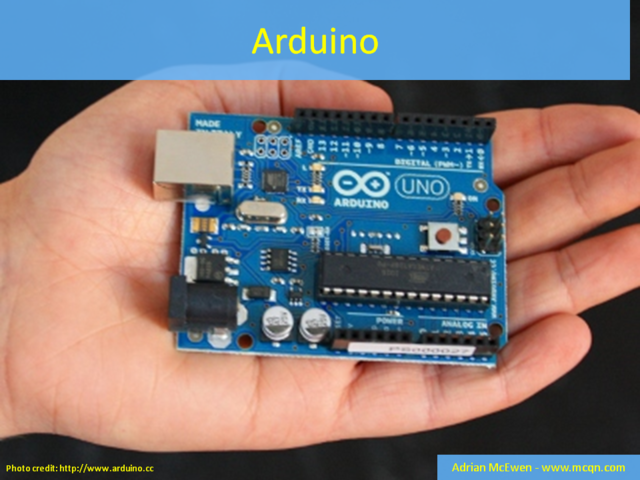 Obviously that chip is just one part of a computer, but the sort of cheap chip I just showed doesn't have to sit in a standard PC. This is an Arduino board, which I use quite a lot in the projects that I build.

It's got a processor, a bit of storage and some RAM, and it's geared up for connecting up to all manner of electronics: sensors - so it can find things out about its environment; or turn things on - LED lights, or motors; play sounds; connect to the Internet and either send data out, or read things in.

That's more than enough theory, let's get onto some examples of ways you can use this to help promote your business... 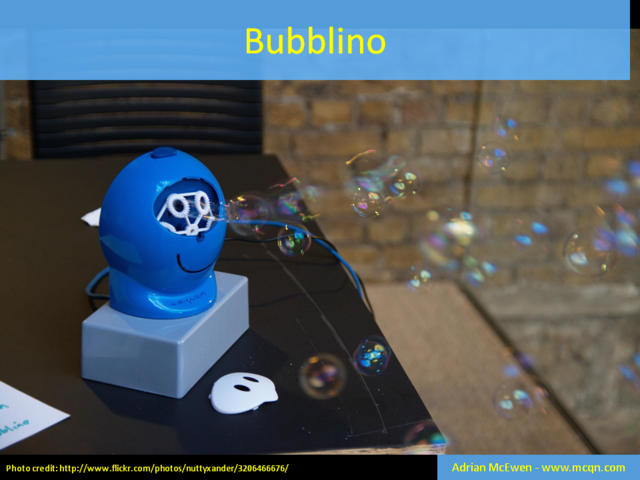 I'll start with encouraging people to tweet about your business, or your event. Bubblino is a product I developed which watches twitter for mentions of a given keyword and blows bubbles whenever he finds a new tweet.

He's a useful "social object", in that people have to tweet the event hashtag to set him off, and that encourages their followers to discuss where they are and what they're up to.

BakerTweet from POKE on Vimeo.

And this is a device sending things *to* Twitter. Baker Tweet is a box installed in a bakery in London. Because things are generally messy in the kitchen, they've got a dedicated device to make it easy to tweet about what's happening.

It takes up-to-the-minute information about activity in the bakery, and pushes that out to the wider world. If you work near the bakery then you can follow the @bakertweet account and find out when the pain au chocolat are fresh out of the oven, and then time your tea break accordingly... 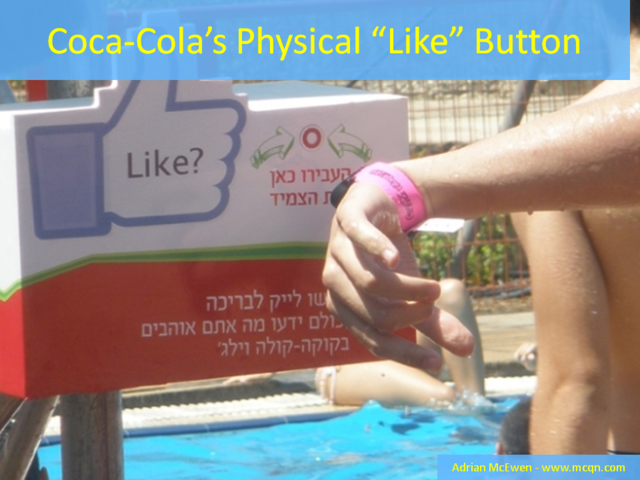 Obviously it doesn't just have to be interacting with Twitter. Coca-cola wanted to do something to target the teenagers who visit the Coca-Cola Village (it's like a cross between a holiday camp and a theme park) over summer in Israel, so Facebook was a better fit with their target market.

They gave each visitor a wristband which contained an RFID chip - like the ones in Oystercard, or for keyless entry into offices. That was tied to their Facebook account, and at each attraction in the village there was a box like this one, with an RFID reader in it. When you swiped your wristband against it, it posted a message about that attraction to your Facebook page.

They had 650 teenagers visit the village, and that generated over 35,000 posts on Facebook.

[I didn't show the video of this in the talk as it's hard to embed YouTube videos into Powerpoint, but you can watch it here]

As I mentioned earlier, you don't *have* to connect things up to the Internet... 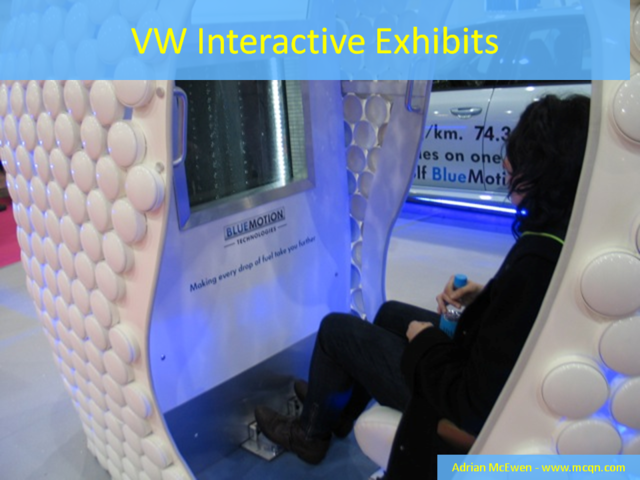 This is an interactive exhibit I helped build for VW, and it's touring round shows all over Europe to inform people about VW's BlueMotion super-efficient engines.

You can't see it very well, but there's a curtain of water drops falling down in the space that looks like a screen. The pedals control some clever strobing of the lighting on the water drops to let you control the movement of water - making it seem to freeze in mid-air, or even travel upwards.

That's tied to some slides which talk about how the engines don't waste a drop of fuel, but the interactivity means people are more likely to find out about it than if it was just a basic slideshow.

And finally, another project from Nike. This one tied in with Lance Armstrong and the Tour de France. They built this trailer which can print out messages onto the road in chalk.

People could send in messages via text, or twitter or through the website, and they'd get printed out on the road ahead of the tour. The trailer has a camera on it too, and it would take a picture and log the GPS co-ordinates of where the message was printed, and send that back to whoever sent the message.

I think it's just a lovely project, and shows the power of blending the online interaction with a connection to the real world. 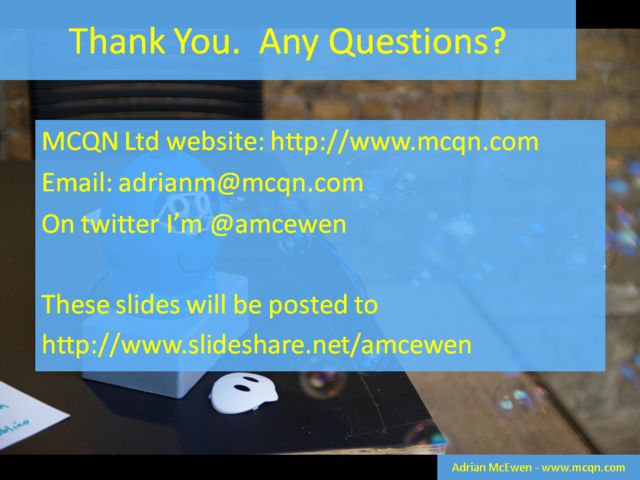