Fortnight-notes this time because it's been a busy time with plotter making.

Having chosen a new pen plotter to use, I got the remaining ones we'll need ordered and they've arrived. In the meantime I got to designing a pen holder attachment as the new plotters are intended for laser-engravers...

I got to level-up my FreeCAD knowledge designing that, as I've used the Assembly4 workbench to pull the parts together to let me work out how they intersect before any plastic got cut or printed. This is how the pen holder looks in CAD: 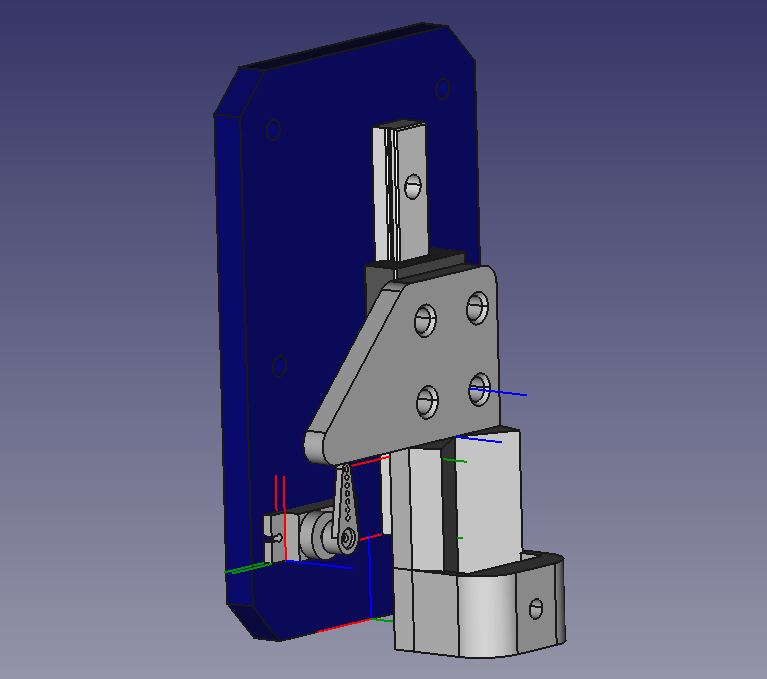 Alongside the design work there was lots of parts and material ordering. Some things I knew we'd need from the last build, and then as the pen holder design firmed up I could also order the bits for that. My desk is overflowing even more than normal as things have been arriving!

Speaking of parts, the global chip shortage continues to throw up challenges. Our next batch of Museum in a Box production is on the brink of manufacture but two parts have proven hard to locate. I spent a day hunting round for supplies—I've managed to get an order in for one of the parts, and fired off a bunch of RFQs to suppliers to try to track down the other. Fingers crossed.

The My Bike's Got LED board hasn't gotten to the parts ordering stage just yet, but I have made some decent progress on laying out the PCB. Client work has taken priority for a little bit, but I should get back to it soon.

And we're still chipping away every other week on the teleprinter. That's proving a bit frustrating at the moment, as it feels like we've moved backwards from an almost-fully-working state a month or so back. I think it's more that we've made changes on two fronts—the interface electronics and the figures/letters switching—so now it's not clear which has caused the issues we're seeing now that we've brought the changes back together.

We'll work it out.

Here's the video diary of the latest work on it: