< Adding SL030 RFID Readers to Node RED on the Raspberry Pi
30 Years Of... Exploring the Time Since the Miners' Strike >
Last Christmas, we gave you a tree,
With coloured LEDs,
You could set with a tweet.

This year, to increase the cheer,
We thought we would go one better...

With MCQN Ltd's focus on the Internet of Things it's no surprise that this extends to our just-for-fun Christmas projects. 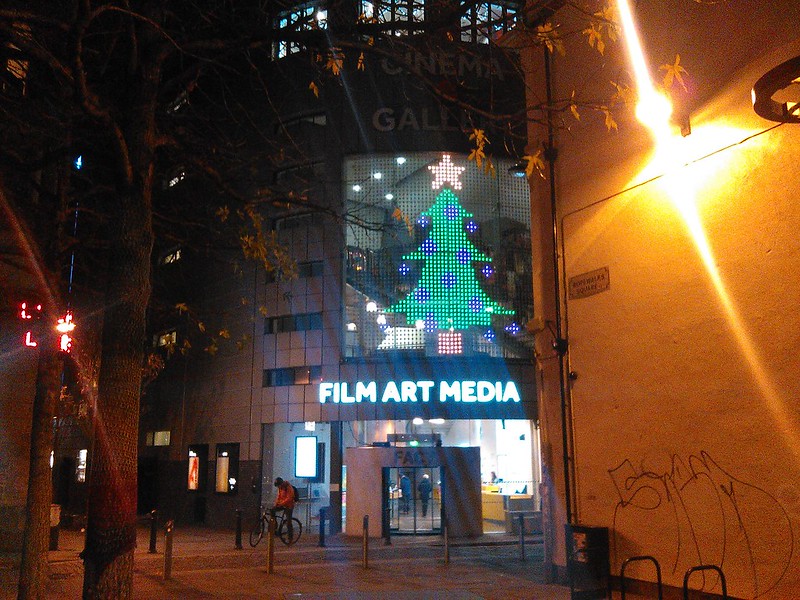 Ropewalks - the area of Liverpool where our studio is based - has a wonderful mixture of artists, tech companies and independent businesses. Once we'd hatched our plan, we tapped into our network through DoES Liverpool and FACT to find some collaborators.

Since building the DoES Liverpool CheerTree last year we've loved watching the #cheerlights hashtag on Twitter, knowing that it is updating all manner of lights round the world. The Cheerlights blog shows some of them, but the one in Liverpool is only really visible from the DoES Liverpool office.

FACT, being a digital and media art gallery, has a much more visible display in the form of a huge 50x50 LED facade on the Wood Street side of its building. This time last year it was displaying part of Adrian's artwork Marking Time, which meant that we already knew how to talk to it with code...

Blending that with code from another recent project - the Node RED running on a Raspberry Pi for the 30 Years Of exhibition - gave us the core of what we needed. Adding a sprinkling of HTML5, websockets and Redis meant we could build a microsite to show a live copy of what's visible on the side of the building.

We then worked with artists Zarino Zappia, Anthony Casey, Dan Farrimond and Raquel Meyers produce some suitably festive pixel artworks which would work on a 50x50 pixel display.

The result is an exhibition of sixteen images, with only one on display at any one time. Anyone, anywhere, can choose which one is shown by tweeting its name along with #Cheerlights or #PixelCheer. Each picture can also be customised by the standard Cheerlights method, so including a colour in your tweet (or if someone just updates the Cheerlights colour) then part of the image will change colour - it could be the baubles on the tree or the colour of FrankenSanta's hat.

You can check out the current display at pixelcheer.mcqn.com or, better still, get along to Ropewalks Square in Liverpool sometime before Twelfth Night (5th January 2015) to see it in person.

< Adding SL030 RFID Readers to Node RED on the Raspberry Pi
30 Years Of... Exploring the Time Since the Miners' Strike >