< Thoughts and Impressions of Be2Camp 2008
Who or What is Bubblino? >

This past week the Mazzini project, my controllable electricity monitor, has taken a great step forwards. The initial hardware prototype I talked about earlier has undergone a few tweaks and is now soldered up rather than push-fitted together on breadboard. It's also boxed up in a not-too-pretty but suitably environmentally-sound reused ice-cream tub, which means I can leave it running without fear of anyone accidentally coming into contact with 240V AC. 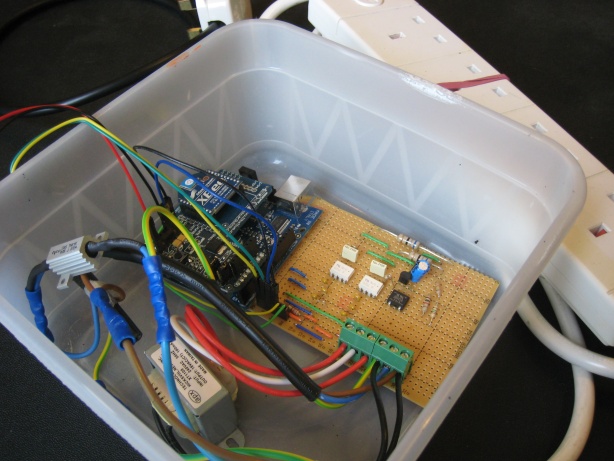 The couple of wires you can see dangling over the edge of the box are all from the low-voltage, Arduino side of things and are completely electronically isolated from the mains. They hook up to the light and temperature sensors, which I obviously want to measure the conditions outside the box. I'll be moving them to a better location next time I break out the soldering iron.

But the bigger advances have been made on the software side.

The Arduino board measures the voltage and current a thousand times each second, and uses that to work out the power used. Every five minutes it then reports how much power has been used, along with the temperature and light level, over a Zigbee wireless networking channel to a receiver plugged into my server. The server then sticks the readings into a database and uploads it to a Pachube feed.

That gives me an easy way to get pretty graphs showing how the power usage, light level and temperature have varied over time - like these:

It also means that anyone can have a look for themselves at the live feed from the Mazzini prototype. It's currently monitoring my home file and email server.

There are still a few things to add to the prototype, and a couple of bugs to iron out, but I'm starting to look ahead to what happens next.

I've just ordered some parts to let me build a second prototype, which will add a relay to let the Arduino control whatever is plugged in, and also let me update the software to cope with multiple monitors talking to the server. In the longer-term I'll extend one of the units with the new Arduino ethernet shield so it collects all the data for the monitors, uploads it to Pachube, and removes the need for an always-on PC (not the most energy efficient way of collecting the data, although mine is doing other things 24x7 already).

I'm also looking into ways to make the Mazzini modules more widely available. Making my house more energy-efficient and energy-aware is interesting, but isn't going to make a huge difference to the world. Imagine how cool it would be if anyone could buy one of these and start to monitor and control the appliances in their home or workplace. It would also let me devote more time to working out how to monitor other things, like gas or water usage, or to find better ways to visualize how much energy we consume.

However, I'm still planning to make the hardware and software open source. There are just far too many possibilities for interesting and novel uses that I've not thought about.

How You Can Help

Tell people you think might be interested. Tell me what you think of the idea, or what you'd do with one. Let me know if you want to buy one - either a fully finished hardware model or just the power-monitoring board that you'll box up with your own Arduino. I'm not going to assume an expression of interest is a definite order, I just want to gauge how much interest there is. It'll be a while anyway before complete units could be available, although the hardware-hacker boards would be released sooner.

< Thoughts and Impressions of Be2Camp 2008
Who or What is Bubblino? >