On Friday I spent the day in Oldham. I used to visit the outskirts regularly for karting sessions in an old converted mill, but had never been to the centre. Like many in the North West, it's full of lovely architecture but also a certain faded glamour of times past with lots of scope for ventures new as a result.

I was there to speak at the first TEDxOldham, an interesting event with topics ranging from the graphene research to roller derby. My talk was about smart cities, and I used the opportunity to flesh out some of my thinking on the approach I'd like to see things take. In the process of writing the talk I collected together some links, which I've published separately as a bit of a Smart Cities Reading List.

There'll be video in due course, and in the mean time, read on for my slides and notes. As ever, the notes are my preparatory work for what I planned to say, rather than a definite guide to what came out once I was on stage... 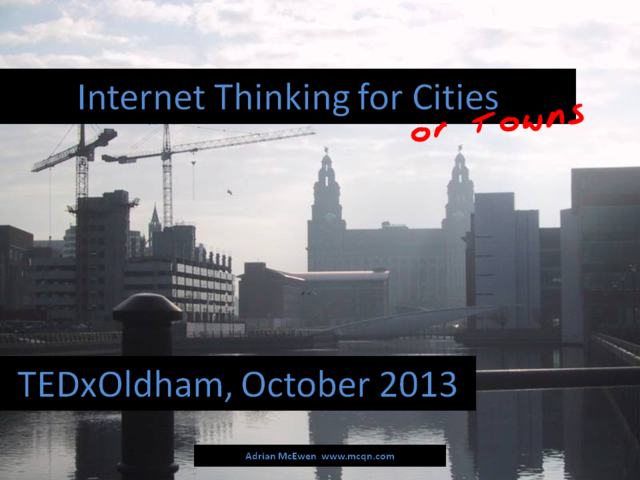 Thank you for inviting me to speak today.

With the amount of time we spend online these days it feels like there isn't much left that the Internet hasn't yet affected.

However, that's just our computers and mobile phones. With the next wave of the Internet - the Internet of Things - the falling cost of processors and electronics mean we'll be bringing computing power and network connectivity to all manner of previously isolated and "dumb" items.

To pick a couple of examples that I've worked on personally, that could be some sensors inside a silo of chicken feed (which actually was just up the road on a farm outside Blackburn) that can relay how much feed is left over a 3G connection so the feed supplier knows when to send out a lorry with another few tonnes of feed to top it up.

Or it could be a bubble machine connected to Twitter, like Bubblino out in the Marketplace area.

A lot of people are getting excited about the possibilities for what this can do for the places we live and work, and that's what I wanted to talk to you about today.

I'll be talking lots about "cities" but that's only because "smart cities" is the usual term that's thrown around in these sorts of conversations. However, it equally applies to towns - and arguably towns and smaller cities actually have an edge over their bigger brethren. Their size could give them the agility to try things out without having to pin all their hopes on one massive project and potential white elephant. 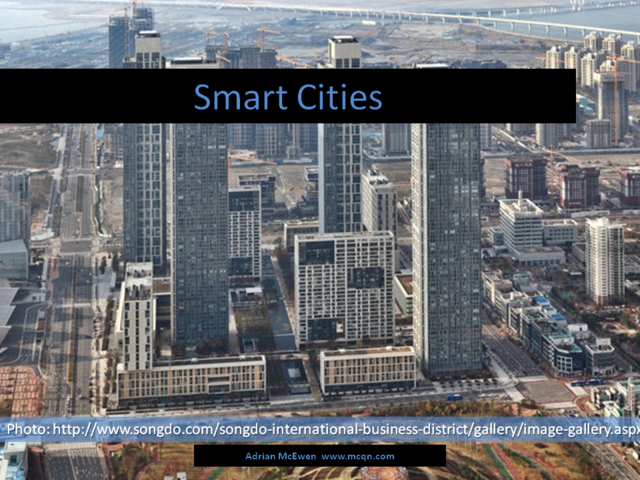 Lots of the "Smart Cities" rhetoric and language comes from the big IT consultancies and computing infrastructure firms.

They all have their own buzzword for it: IBM has "Smarter Cities", Cisco "Smart+Connected Communities", Microsoft "CityNext"...

This is Songdo, a new city in South Korea, which has been built over the past few years. All its information systems are connected together, and every home has a telepresence system to allow control of heating, etc. and also virtual learning and video-conferencing. 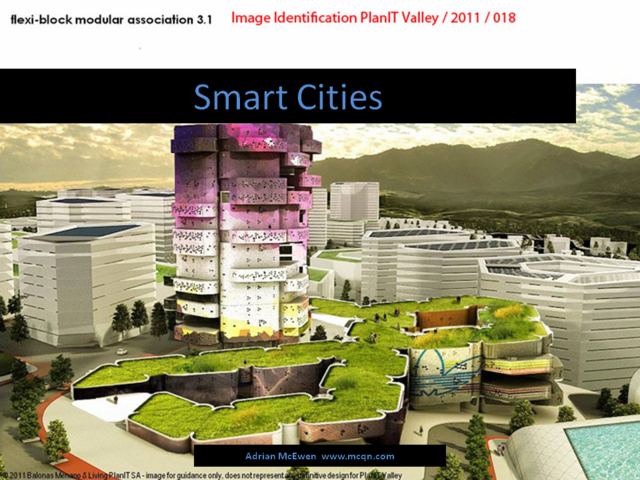 And this is an architectural rendering of PlanIT Valley, another built-from scratch smart city - this time in Portugal. They are aiming to develop what they call an Urban Operating System to manage the city. 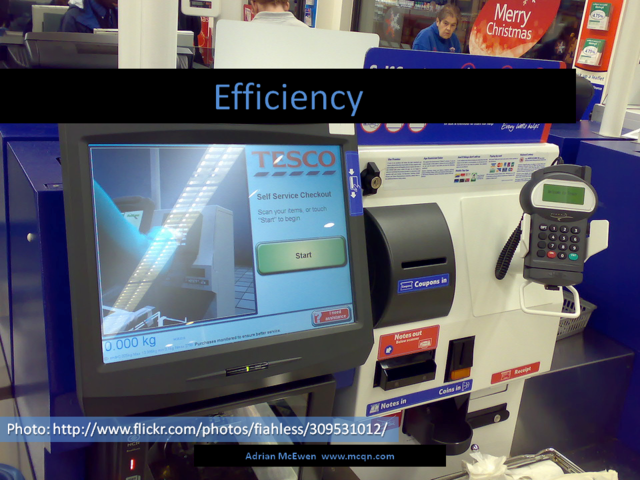 Central to all of these visions is talk about how computing will make life and cities more efficient. You'll get to work more easily because traffic will be smoothed or because you'll be able to find a parking space more easily; and the council will save lots of money; pollution will be lower and it will be better for the environment.

All of it is predicated on the idea that if we just gather enough data that we can "solve" cities. That data is impartial and apolitical.

But that's a lie. We can see that with the automated tills in supermarkets these days. Even ignoring the aspects like them putting people out of work, they're also optimising efficiency for Tesco rather than customers.

Somebody has chosen the right amount of time that it takes between authorising your payment and the chiding reminder for you to "please take your items". That's a policy enacted in code, and is there just to encourage you to leave the till more quickly so they can increase customer throughput.

These sort of problems where there isn't a single solution, and one solution can often have unintended impacts or where there's a balancing act of different, competing interests are called wicked problems and our cities are full of them.

Usman Haque, an architect and technologist who's work I heartily recommend you check out, even goes so far as to call these problems in cities super wicked.

We should be wary of technologists bearing the answer to all our problems.

The photo in the background of this slide shows a remnant of the last time we tried to reshape our cities around the latest technology. In the 1960s we built new towns and rebuilt our existing towns around the car. The concrete balcony is actually a truncated skyway in the centre of Liverpool, left over from the failed attempt to move all the pedestrians one storey up, out of the way of the traffic. 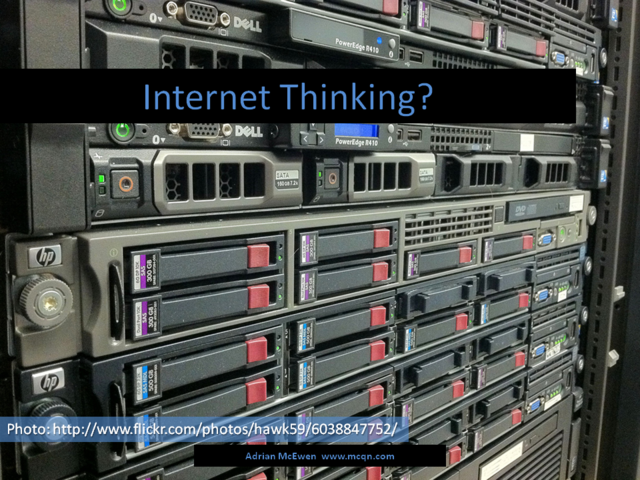 Obviously I have a professional interest in these topics, as my company is helping to build and shape the Internet of Things. However, I'm also interested in them because I live in a city, and I am a citizen. I want my future environment to work better than it does now, and to be more equitable with opportunities for all.

Maybe we can use some of the principles of the Internet itself to guide how we develop the services and applications for the smart city. 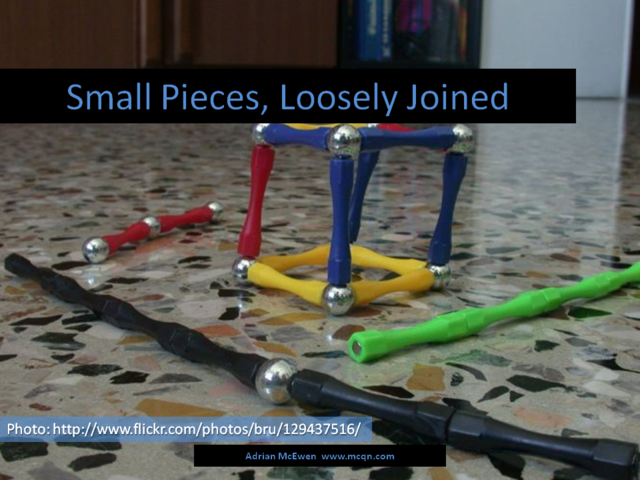 The success of the Internet isn't down to it being one seamless system, built by one company. Its success is because it's the exact opposite. Lots of small systems, which talk to each other via open APIs.

We should avoid top-down, seamless designs and instead expect that parts of the system will be replaced at different rates. Design for change, and make the systems do one thing well.

Building beautiful seams for the different components to talk to each other will allow that, and have the side-effect of enabling all sorts of new ideas to flourish, which we hadn't, and couldn't, anticipate beforehand. 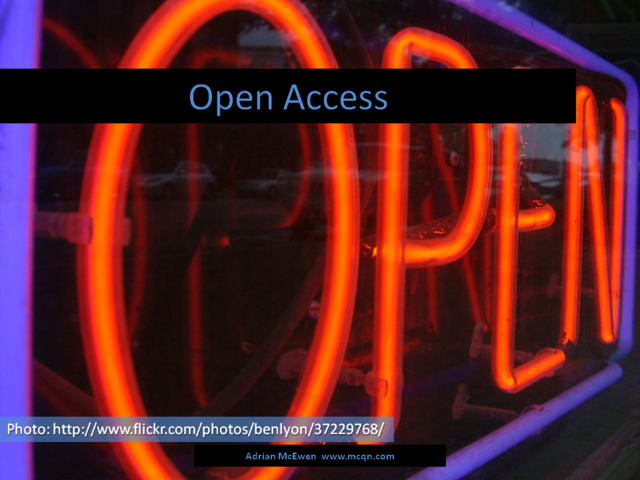 And open access to the APIs and data will enable that bloom of new ideas.

On the Internet anyone can spark up a new service and have people talk to it. Ther aren't any gatekeepers deciding whether or not your service is interesting, or quashing it if it looks too similar to theirs.

Obviously there are downsides to this as well as upsides, but we should be finding ways to mitigate the bad while still enabling the good. 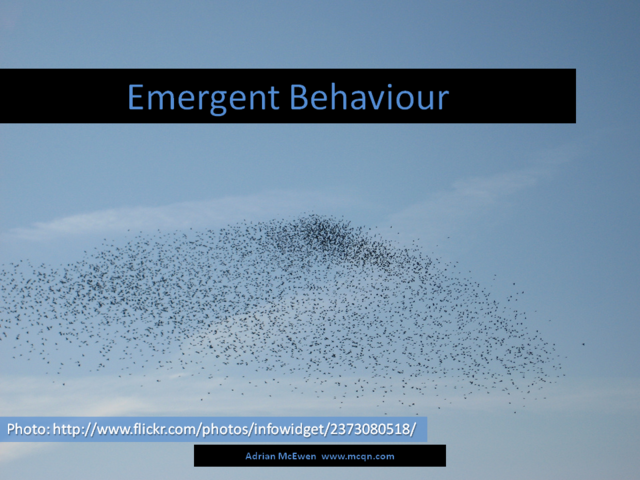 This does mean that the future cities services might not be quite as neatly defined and categorised as we'd like. However, we should just acknowledge that - however much we try - real life isn't cleanly pigeonholed and build systems that are forgiving of these blurry boundaries.

We can achieve more with tags and folksonomies than we can with perfectly thought through semantic classifications. 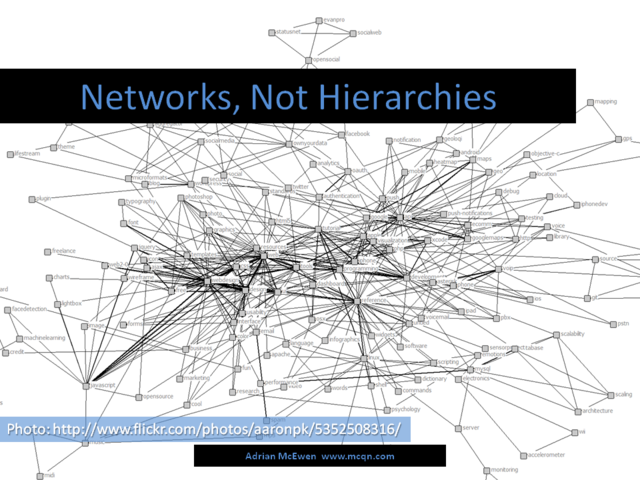 Rather than the traditional hierarchy of councillors and planners working out how our cities should evolve, we should look to the more egalitarian and inter-disciplinary approach of networks.

Yes, involve the councillors and planners, but also draw in architects, technologists, urbanists and citizens in a more fluid grouping of practitioners, ebbing and flowing as needs dictate. Use the strengths and expertise across a wider group, and involve them not necessarily in the entire process but much earlier in the conversation about the city and not just in narrowly defined "consultation" periods. 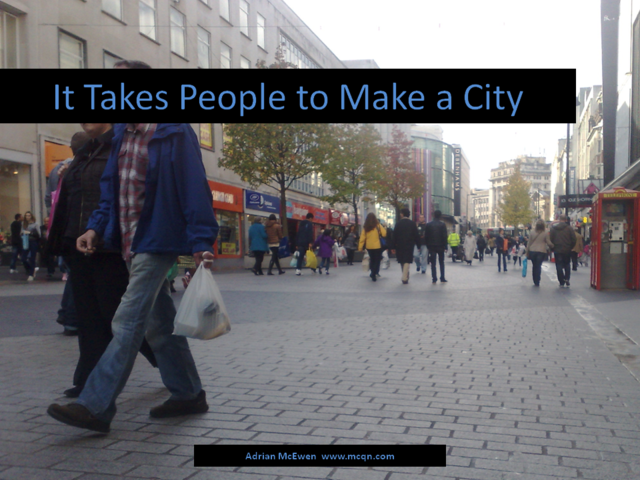 We should strive to build better cities for all of the people in them, not just those with a particular bit of technology - be it cars or smart phones or whatever...

And we shouldn't delegate all the decisions on where we live to councils or corporations. We should be active citizens and help shape the future of where you live, where I live, where we live. 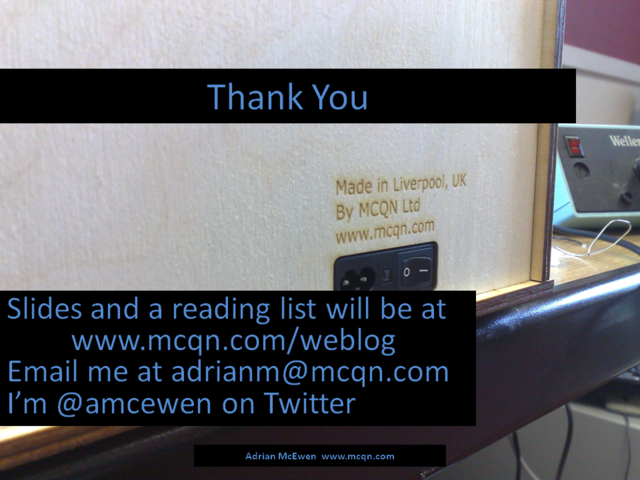