As part of an art project taking place on the Bidston Moss nature reserve, FACT were interested in monitoring how many visitors came to the site and commissioned MCQN Ltd to build something to achieve that.

Conveniently, there were only two paths onto the reserve, which meant that it was conceivable to place monitors at all of the entrance/exit points and count people as they passed. However, there was no power or network connectivity available on the site at all.

Selecting an Eseye Hera 200 board gave a solution for most of those issues in a single board, given that it effectively combines an Arduino Mega, GSM shield and charging circuit. Pairing that with a PIR sensor board to detect passing foot traffic and a solar panel to top up the battery provided hardware to meet the requirements. 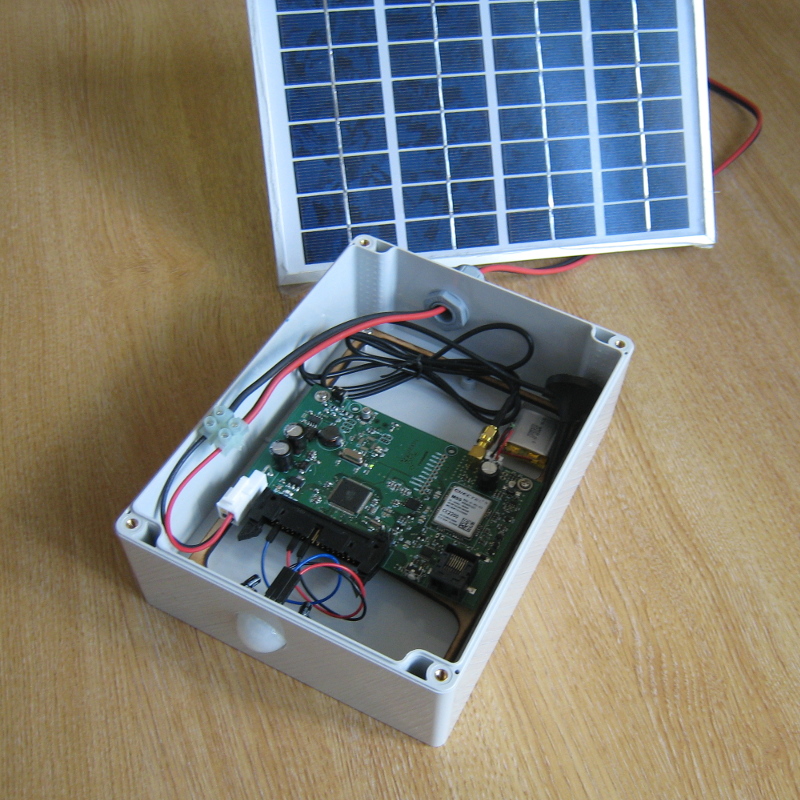 The project only needed to run over the summer, but in Northern England that was unlikely to provide enough solar power to leave the device always on.

The solution to that was to turn as much of the device off for as much of the time as possible. The PIR sensor was the only part of the circuit which was left permanently powered-up. When it detected movement it would trigger the interrupt on the Arduino to wake that from deep sleep. When that happened the Arduino would merely increment the count of people who’d passed by and then put itself back to sleep.

It wasn’t necessary, nor desirable, to count the exact time each movement was detected, so the system kept counts in buckets of 15 minute intervals. This is what was reported back to base, but in order to further reduce the power requirements (bringing up the mobile phone radio was by far the largest power drain) the data was only uploaded every few hours.

Data was uploaded to the Xively data service, and included battery voltage and charging voltage to give an indication of how sunny it had been. This allowed remote monitoring of the state of the battery and would allow more proactive action if there were any problems.

Xively acted as a long-term datastore, but wasn’t suitable for display on the project website. The final piece in the jigsaw was a small web script to take the data feed from Xively and format the information in the relevant form for display to the public.